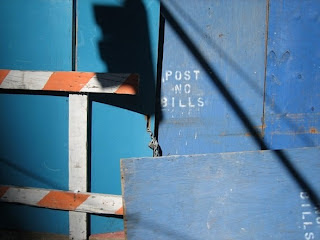 For some reason, whenever a plywood wall goes up around a construction site, it's painted bright blue. I'm sure this must be rooted in some city code, but it's interesting that we have such a custom. Why blue?

This particular wall surrounds the new building for The New York Times, which has gone up at the corner of 40th Street and Eighth Avenue. The new Times building has generated a bit of buzz - I was reading a rant the other day from one blogger who hates it. I think he called it a "gray prison." That's a rather severe description, but I agree it's not quite as lightweight and luminous as it looked in the architectural renderings. Let's save our final judgment until it's done, though!

This week is turning out to be a bear; I guess that's to be expected the week before Christmas. So much to do! As I was sitting last night, following my breath, watching my brain periodically float random thoughts, I found myself wishing that my meditation time would hurry up and end so I could move on to other things. It struck me how silly that was. I was basically wishing for a half-hour of my life to rush by!
Posted by Steve Reed at 11:33 AM