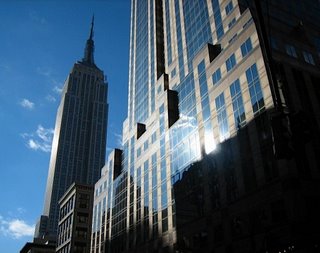 We had a beautiful weekend after our cold front blew through on Friday night. I took this on Saturday morning from the corner of 38th Street and Fifth Avenue, looking south. That's the Empire State Building four blocks away. As you can see, lots of sun and wild blue sky.

The Empire State Building has never been my favorite, but it did play a crucial role in my decision to live where I do. When I was apartment hunting in 2002, I looked at maybe two dozen places, and for various reasons couldn't find anything that worked for me. Then I was shown an unremarkable studio on E. 29th Street. I looked around the room, which was functional, and then out the window - and there was the Empire State Building, lit up like a colored beacon. Angels sang, and I made an offer instantly. I love being able to look out my window and see New York's most famous building!

Despite the sunshine you see in this picture, photography was difficult this weekend. We're getting close to the winter solstice, so the sun now comes up around 7 a.m. and sets at 4:30, and even in midday it's just not very bright down at street level. I wandered around Tribeca yesterday and I got some pictures, but everything was so shady - tough for a guy who likes shadows!
Posted by Steve Reed at 11:39 AM