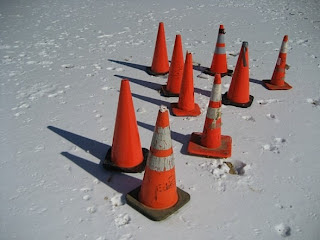 One of the areas I visited during my rambling on Saturday was DeWitt Clinton Park, near the Hudson River at 54th Street and 11th Avenue. It's named after a former senator and mayor of New York from the period soon after the Revolutionary War.

In fact, this entire neighborhood has been rebranded as Clinton in recent decades, probably by real estate brokers who feared it would be tough to sell apartments in Hell's Kitchen. (They obviously did not understand the youthful tendency to embrace unpleasant terms with irony.) Anyway, most New Yorkers still use the old name. I never hear anyone call it Clinton.

These traffic cones were huddled in the middle of the baseball field, as if trying to ward off the cold. (And with the wind off the river, it WAS cold.) 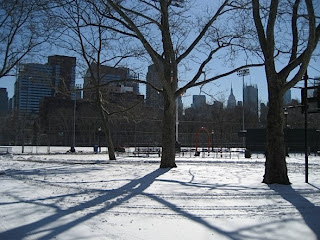 The park has a nice view toward Midtown. The snow had melted just a bit and then refrozen, so it was hard as a rock. I could walk across it and barely leave a footprint. The footprints that were there must have come from an earlier time, when the snow was softer. 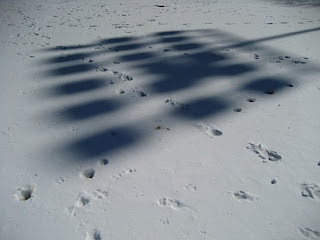 The stadium lights cast huge shadows that looked something like a black-and-white game of "Twister" - which, admittedly, would be hard to play.

The landscaping featured hilariously explicit signs: "Please do not allow your dog to urinate on the garden." Usually New Yorkers favor the much more discreet phrase, "Please curb your dog." I guess in this case, someone thought that would be too vague. After all, subtlety sometimes breeds confusion.
Posted by Steve Reed at 11:35 AM