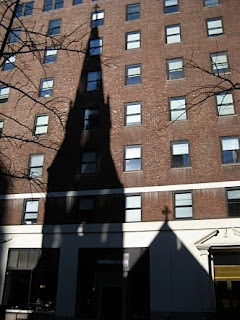 When people think of Madison Avenue, they think of advertising - part of the religion of the dollar, I suppose. But conventional religion is there too. The Episcopal Church of the Incarnation at 35th Street casts a dramatic shadow on a nearby office building.

I went to my friend Jan's last night to watch the Oscars. I think the only contender for Best Picture I hadn't seen was "The Departed" - and look what won. So now I'll be trekking to the theater with a zillion other people. And poor Peter O'Toole! I loved Forest Whitaker in "The Last King of Scotland," and I didn't even see "Venus," but c'mon - Peter O'Toole needs an Oscar. This Susan-Lucci-type taunting has gone on long enough.
Posted by Steve Reed at 11:34 AM