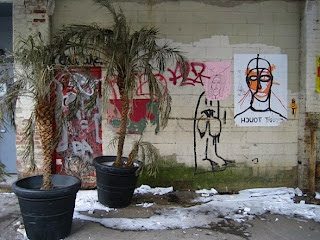 I found this curious tableau on the sidewalk in the trendy Meatpacking District. The palm trees probably got evicted from a restaurant or nightclub, and were left to perish alongside the street art. They still give off a tropical air, despite the snow on the ground, don't they? Street artists represented behind them, left to right, include Royce Bannon (red & green), Flower Face Killah (pink), Michael deFeo (white portrait) and Stickman (small orange figure). I'm not sure who's responsible for the Godzilla creature, but you may remember I've featured one before. You can see the latter four in more detail below.

I had fun last night. First, I went for my semi-annual massage, which I would do much more frequently if I could afford it. (One problem: They always ask which kind I want, and I can never remember, so I say "Swedish," and then about halfway through the massage I remember that it's "Deep Tissue" I really like. Oh well. Swedish certainly ain't bad.)

Then I went out with friends to an Italian pastry place in the Village. I ordered one called a "French Lulu" - isn't that a great name? You'd order one too, right? Well, the pastry was a bit much: A big glop of cream surrounded by pastry shell and sprinkled with cocoa powder and...something else, which I can't remember. I'm still feeling a little green. But I readily ate the whole thing. 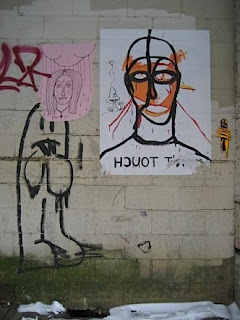 Did you hear our latest wildlife story? We've got a beaver living in the Bronx. Someone found the lodge, and the animal itself has been photographed swimming in the Bronx River. (Bleah.) I love these wildlife-in-New-York stories. We've had a wild turkey in Morningside Park, a coyote in Central Park, and a moose in Westchester. Now this!
Posted by Steve Reed at 11:19 AM