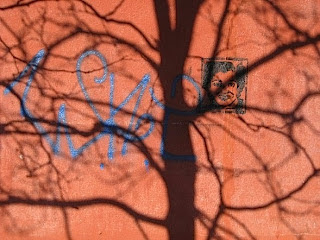 I visited some acquaintances in Brooklyn Heights the weekend before last, and as I was getting ready to leave their house, I asked them how to get to Red Hook.

“Well, you can take the B61 bus down Van Brunt Street,” they said. But I said I didn’t want to take the bus. I wanted to walk.

They looked at me like I’d lost my mind.

“You can’t walk to Red Hook! It would take, what, two hours?” They looked at each other blankly, clearly having never done it themselves.

I set out on foot anyway. If there’s one thing I’ve learned, it’s that people often make walking sound far more impossible than it actually is.

Another friend walked part of the way with me, until we reached his street. But as he turned toward his house, he also suggested I try to catch the B61.

I don’t like buses in New York. They are agonizingly slow, often outpaced by pedestrians on the sidewalk. Also, you can’t take photos from a moving bus.

So I kept walking, going as far as Sackett Street, somewhere in the border territory between Cobble Hill and Red Hook. It wasn’t that far of a walk - more like 20 minutes than two hours - but I still wasn’t sure how far I was from Red Hook proper. And I hadn’t seen much to photograph.

Just as I was beginning to doubt my plan, the B61 came rumbling down the street. 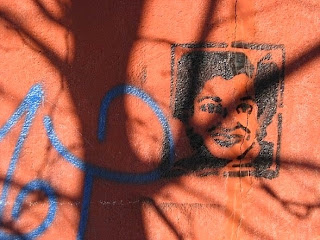 But of course, literally seconds after I boarded the bus and sat down, we passed this terrific red wall, stenciled with art and blasted with a vascular-looking shadow. I couldn’t believe my bad luck.

I rode along slowly, wondering what to do. I didn’t want to look totally clueless and make the bus stop immediately so I could disembark. These people were all trying to get somewhere, after all. I resolved to wait until the next stop.

Fortunately, fate worked with me. There was a tremendous backup of traffic on Van Brunt Street. That bus wasn’t going anywhere. So I waited a few minutes and then climbed back off. Blame it on the traffic.

I high-tailed it back to Sackett Street - all of three blocks away by this time - and took my photos. I resolved not to board a bus again, and found Red Hook easily walkable and ripe for photography.