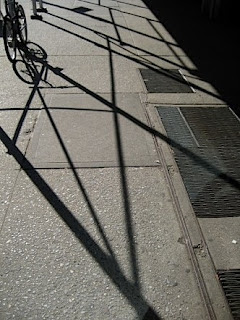 When I first moved to New York, I noticed a lot of loose change lying around on the sidewalks. Definitely more than I ever saw in Florida. I guess it’s because New York has so many pedestrians, all continually fumbling for cell phones and Metro cards and knocking the change out of their pockets. (In Florida, it all falls under their car seats.)

I began playing a game: Every day, I would find one penny. It was a personal challenge. If I found more, great, but I had to find at least one.

I kept it up for maybe a month, and I didn’t fail often. But it ceased to be fun because I'd turned it into a chore. On days when those stubborn pennies didn’t readily materialize, I spent all my time looking at the ground, and the element of the lucky accident was gone.

I don’t search for pennies now, but I still almost never pass one up when I see it. My friends would say this is because I’m a tightwad - and, O.K., I am a tightwad. I admit it.

But honestly, that’s not the reason. Instead, it’s a kind of superstition, a mistrust of the arrogance involved in bypassing the penny. Someday I may really need that penny. Someday, it could make a difference. 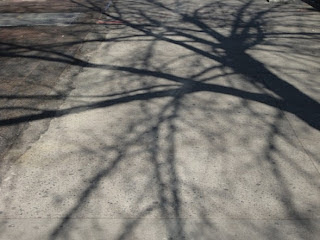 I also like finding value in something that most people just find annoying. It’s kind of mind-boggling to me that a lot of people think of pennies as, essentially, trash. They wouldn’t pick one up any more than they’d pick up a gum wrapper. Do I have to point out that pennies add up to dollars?

Now, photography has given me another reason to pay attention to sidewalks. I tend to focus more on walls, but every once in a while, I see a great shadow splashed across the pavement in front of my wandering feet.

And that’s worth even more than a penny.
Posted by Steve Reed at 11:23 AM