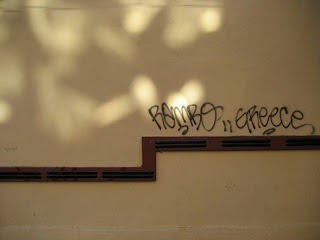 Sometimes when I'm out walking around, I'll see something that I think might make a good photo. I'll take a couple of shots, trying different angles - but if I have to try too hard, I often go away unsatisfied and I wind up throwing it out.

On the other hand, when I see something like this - a simple composition, but one I don't doubt - all I need to do is take one frame and I know I've got it. So much of photography is pure instinct, trusting your responses.

I had an interesting outing with my friend David on Sunday night - we went to see Kiki and Herb, a legendary drag act, and one that transcends the catty nature of most drag acts. I don't love drag performances in general, with their mean-spiritedness and strenuous attempts to be clever. But Kiki and Herb are different.

Kiki is the drag persona of Justin Bond. She's a boozy, aging cabaret singer who specializes in bizarre covers of songs you've probably never heard covered. (On Sunday, for example, she did Melanie's "Momma Momma," which I've never heard any other singer attempt.) Accompanied by her brilliant pianist Herb (Kenny Mellman), she manages to create a sort of weary, dark elegance with her wild hair and laborious vocals. It's a drag show with depth. I was amazed at how much I liked it.

See them performing Kate Bush's "Running Up That Hill" here.
Posted by Steve Reed at 10:37 AM