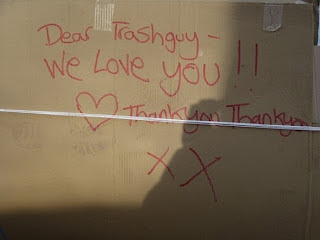 Here's a novel idea: a thank-you note for the trash collector, written on a bale of discarded cardboard. A love letter, even.

I like this corner of the East Village, which I visited on my first trip to New York in 1995 and pretty much every trip after. I spent a memorable afternoon at One and One, a pub at First Street and First Avenue, bonding over beers with my old friend Arthur. And right up the avenue is Lucky Cheng's, where my friend Sue and I had dinner 12 years ago, at the recommendation of our elegant blonde bartender at Harry Cipriani in the Sherry Netherland Hotel.

Back then, Lucky Cheng's seemed crazy and urban, a restaurant in a former bathhouse where Asian drag queens waited tables. Going there, we felt very "in the know." But then I found out it's a multi-city chain, and when we went back - this time in New Orleans - we had terrible food (a sin in New Orleans) and bad service. I haven't been back since, and I've only been to One and One a handful of times.

I guess both are important to my past, but not really relevant to my present. I still like the neighborhood, though.

I went to see "Zodiac" last night. It's an interesting movie, though a little too long. Jake Gyllenhaal seems to be the poster child for the film, but the cast is pretty large, and Jake disappears for long periods of time. As far as I'm concerned, Mark Ruffalo wins the "sexiest actor" award in this movie, Jake or no Jake.
Posted by Steve Reed at 9:25 AM