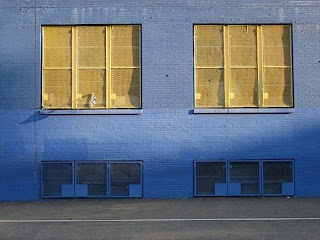 This is the back wall of the Adolph S. Ochs school, on the far west side. Blue and yellow go so well together, don't they? It was late in the evening, so the light was soft and the shadows weren't clearly defined.

This color combination reminds me of going out last night with my friend Dan and his partner Jimmy. We went to a sitar concert by Anoushka Shankar, the daughter of Ravi Shankar, who made his name by bringing sitar music to George Harrison and the Beatles. Anoushka, who's 25, is a musician in her own right, and the performance was great to hear. It was also great to see: She sat on a raised platform on the stage with some other musicians, backed only by two curtains and a blank wall. The wall and curtains continually changed colors, with lots of interesting and even improbable combinations: blue and lime green, red and purple, etc. Her lighting designer gets kudos from me.

I think I've injured my shoulder. Ugh! I had a deep-tissue massage when I was down in Florida last week, which involved the therapist "adjusting" some of my muscles and joints. I was fine until I then went to the gym four days later. I was lifting dumbells overhead when I felt my shoulder tear. Ack! My guess is, the massage stretched the connective tissue, and then the exercise pushed it too far. So I'm waiting to see how it heals on its own. It feels much better today than it did on Tuesday, when the injury first happened, and my range of movement is only slightly limited. I can reach everywhere, but at some extremes I get a little pain and just have to be careful.
Posted by Steve Reed at 1:05 PM