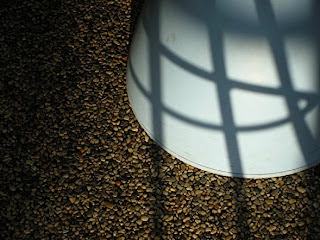 For once, I was trendy.

While in West Hollywood, I got to visit Pinkberry. For those of you who are not trendy, Pinkberry is “the” place to go for frozen yogurt.

It got written up recently in The New York Times and in fact has spread to the Big Apple, as well as other locations in L.A. But it got its start on a side street off Santa Monica Boulevard, which is where my friend Jerry took me on Saturday afternoon.

Pinkberry offers two kinds of yogurt - plain and green tea - with an assortment of toppings like strawberries and kiwi and Cocoa Pebbles cereal. There's also a sweet rice topping called mochi that you have to know about to ask for (it’s not on display like the others).

Jerry and I got our yogurts, mine a $4.95 medium green tea with strawberries, blackberries and the mysterious mochi. As we sat in the tiny restaurant, I noticed the afternoon sun casting long, dramatic shadows across the floors and colorful stools. I got out the camera and took a few shots. 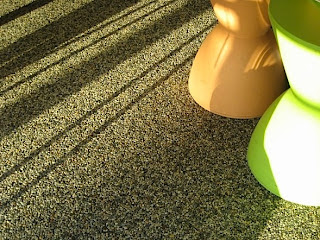 And then, a slim redheaded teenager who looked like Opie on "The Andy Griffith Show," and whom I shall call the Pinkberry Bouncer, came over and said, “Photos are not allowed in the restaurant.” So I put my camera away, my feeling of trendiness somewhat punctured.

Christopher, Jerry and I debated this rule later. Maybe it has something to do with competition - maybe they don’t want people taking photos of the menu, or the presentation of the yogurt. But I was taking pictures of the chairs. As I said to Christopher, “Are they afraid someone else might open a restaurant with colorful plastic furniture?”

Well, anyway, the photos turned out nice. And the yogurt was good, though I’d be just as happy with some Haagen-Dazs sorbet. I guess deep down I’m just not very trendy.
Posted by Steve Reed at 11:05 AM