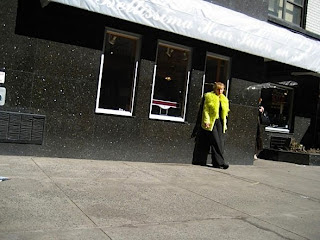 I've been trying to experiment a bit with taking photos of people. It's kind of hard with my camera, because its wide-angle lens tends to make things seem more distant than they are. So the people wind up being pretty small, unless I get right up in their faces, which in New York is probably not wise.

I haven't had the courage to take a photo of a perfect stranger head-on and risk confrontation. I took these photos surreptitiously, standing or sitting near them and holding the camera down near my waist. Which sounds like a kind of silly, Dick Tracy way of taking a picture. But it leads to interesting, spontaneous composition!

The woman above was standing on 57th Street, having a smoke outside an office and wearing that awesome furry fluorescent green jacket. 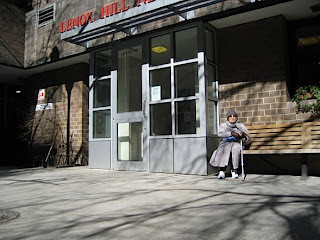 This elderly lady was sitting outside a senior citizen home on First or Second Avenue.

I think more discerning people pictures will have to wait until I get a better camera, or develop more fortitude about approaching strangers. Meanwhile, at least you can see that there really ARE people in New York. It's not just a city of empty doorways and cool tree shadows - in case you were wondering.
Posted by Steve Reed at 10:49 AM