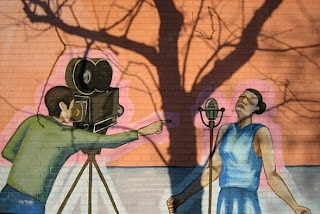 In the far west 50s are several recording studios used primarily, I think, for Latin music. This is part of a mural on one of them, at 53rd Street and 10th Avenue. Such drama!

I was at an all-day retreat yesterday at the Zendo, and it turned out to be a really good day. Some retreats feel like slogging through quicksand, every breath a labor. But yesterday I felt really “on,” really in tune with the experience.

In Buddhism you often hear the term “monkey mind” used to describe the restless, ever-mischievous nature of our minds. Ideally, in meditation, you are aware of that monkey mind, and you just kind of watch its Curious George act as it grasps thoughts and ideas, turning them over in its little hands. You don’t let yourself get swept up in any of those thoughts. You just watch your mind bring them up, and then let them float away as your mind, in its monkeyness, finds something new to play with.

It’s amazing what comes up when I sit. Sometimes my mind wants to rehash a conversation I had with my boss earlier in the week, or it wants to mull over that morning’s exchange with one of my Zen teachers. Sometimes it wants me to think about the next picture I’ll use on my blog. Sometimes it wants to argue with people who aren’t there. Sometimes it produces a romantic fantasy, or even a sexual one. All of this happens on the cushion, completely unbidden, and I just let it all rise up and float away.

So yesterday, I was greatly amused watching my monkey mind put on a show every bit as dramatic as the singer in this photo. I actually described the day’s sitting as “fun,” which brought chuckles from some others in the group, but it really was. You just never know what Curious George is going to do next.
Posted by Steve Reed at 10:40 AM