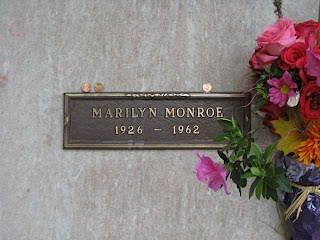 Today we made a pilgrimage to Westwood Memorial Gardens, a tiny cemetery entirely hidden in the interior of a block of tall office towers and commercial buildings. You'd never know it was there unless you searched for it.

I thought visiting Marilyn would be an interesting Hollywood outing. Maybe an unusual choice, given that I was born several years after Marilyn died. For me, she's never been anything but dead. But she's such a legend, and I've seen lots of her films, so of all the possibilities, she's the dead star to whom I most wanted to pay my respects.

Turns out that finding the cemetery was the only difficult part of the whole expedition. Once we were there, we wandered around until we found her crypt in the mausoleum. It only took ten minutes or so - we just looked for flowers. I figured wherever Marilyn was, there would surely be flowers.

There she was, on the second row up from the bottom, surrounded by people I'd never heard of. (How strange to be an everyday Joe, interred for all eternity next to Marilyn Monroe!) Odd to think that was really her, at least in the physical sense. People had propped pennies atop the bronze nameplate, next to a suspended vase of pink roses and long purple flowers. Some had kissed the crypt, leaving red lipstick marks.

She has good company in that cemetery: Walter Matthau, Dean Martin, Mel Torme, Natalie Wood, Jim Backus. I also found both Eva Gabor and Eddie Albert, and spent a few moments laughing about "Green Acres," a really terrible show that I loved as a kid. True to the changing nature of Beverly Hills, lots of grave markers bore Iranian names and Arabic script.

Some people think cemeteries are eerie, but I find them fascinating. And apparently other tourists do too, at least in this case - there were several of us wandering around. I took some pictures, secure in the knowledge that none of the dead stars would mind. They lived their lives for the cameras, and it's actually a tribute to be remembered fondly ten or twenty or, in Marilyn's case, 45 years after your death.
Posted by Steve Reed at 1:31 AM