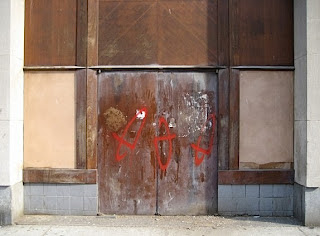 Here's some more graffiti from our "3-e" tagger. (You may remember this earlier example.) This is on the door of an abandoned synagogue, which always seems a kind of sad structure every time I pass it. At least it hasn't been turned into a nightclub.

I watched another interesting movie last night, "Jesus Camp." It's a fascinating look at the extreme religious right and the way they instruct their children politically and spiritually. These kids praise and bless cardboard cutouts of George W. Bush and are taught to actively disbelieve global warming (as well as, obviously, evolution and the separation of church and state). They're being prepared by adults who believe them to be an army of the righteous, made to save America. 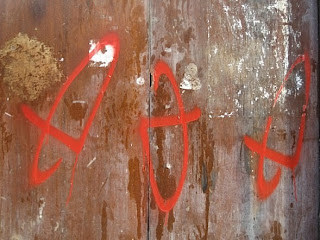 Seeing these kids at church, with tears streaming down their faces, it's easy to understand why evangelical churches have grown at such an astonishing rate. Nothing on the left, or even in traditional religion, offers that same ecstatic experience - and some people really want the ecstasy. They want to believe in something fervently, actively and deeply. I think the left used to offer something similar with its civil rights marches and anti-war demonstrations, but these days, all the action seems to be on the right.

Sometimes I think we as a society, and maybe as a planet, are leaving the Age of Reason. Humanity seems to be moving toward a time when religious belief and faith are intensifying - in Christianity, Judaism, Islam, you name it. There's a migration from moderate religious institutions to more extreme ones, and factions of extremists clash in new and more dangerous ways. The folks in this movie, for example, deride science and the scientific method, and reject scientific evidence that challenges their belief system. There's nothing reasonable about them, and they don't seem to mind that at all.

I don't begrudge anyone their religious beliefs. But what makes anyone so certain they have all the answers? That their truth is the only truth?
Posted by Steve Reed at 10:25 AM