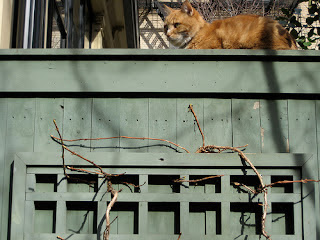 First, the sad one. Apparently, in Florida, common fresh-water turtles are being voraciously hunted, partly to feed an appetite for turtle meat in Asia.

When I was growing up in Florida, I lived on a lake. So when I read this article, my mind immediately jumped back to the turtles I’d find there as a kid -- the weird-looking softshells with their long snouts, the menacing snappers. When we took our rowboat out on the lake we’d pass half-submerged logs that were covered with turtles, lined up and sunning themselves like little old ladies in Miami Beach.

It astonishes me now to think that those turtles, so abundant in my own backyard, are being hunted en masse for food. (Occasionally we’d catch one on a fishing line and view it as a terrible accident. We never ate them, though some Floridians do.) It’s even more mind-boggling to think they’re now being eaten by people on the other side of the planet.

Somehow, in thinking about globalization, this is not a scenario I ever envisioned.

The happy story was about Nubs, a mongrel from Iraq who was saved by a U.S. Marine and sent home to live in America.

I lived in an Arabic country for more than two years, and I’ve seen how dogs are treated there. Dogs are considered “unclean” and street dogs are often subjected to all sorts of torment. It’s a cultural thing.

Nubs went through his own traumas, but thanks to the Marine, he’s got a new lease on life. It can’t have been an easy task to get that dog back to the states. Some of my Peace Corps friends adopted animals while in Africa and brought them back -- including my roommate Juliet, who brought our cat home -- and it was a heck of a lot of work.

So kudos to Maj. Brian Dennis and his fellow Marines. Nubs is a lucky beast.