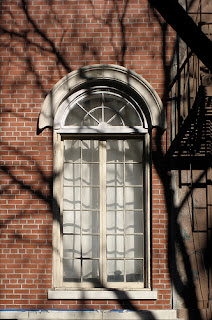 Thanks to those of you who weighed in on yesterday's mystery photo. Now I'm leaning toward the Bulgaria/Russia possibilities. At any rate, it's interesting how cats are the same the world over, right? (My cat is lying on me as I type.)

I forgot to mention that on Tuesday evening, as I was walking to the theater, I passed three Starbucks stores during their mandatory training period. You may have heard that all Starbucks stores nationwide closed for a few hours Tuesday to refresh employees on coffee prep and customer service. It was heartening, as I passed each of these outlets, to see the employees inside in their little huddles. Will Starbucks get better as a result? Well, it certainly can't hurt -- if nothing else, maybe employees will be more conscientious about the customers. (For the record, I got a hot chocolate last night and the employees were unusually courteous -- and the drink was perfect.)

I went to see "Sunday in the Park With George," which is a brilliant show in its staging and artistry. As you may know, it's a Sondheim musical based loosely on the life of Georges Seurat and his painting "A Sunday Afternoon on the Island of La Grand Jatte" (which I've seen at the Art Institute of Chicago). The painting gradually comes together on stage, which is fascinating to watch. The show has less emotional impact than other Sondheims, but it's worth seeing.