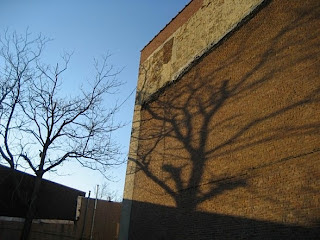 Yesterday, just a few days after the biggest snow of the winter, I felt the first hint of spring. As is so often the case when seasons change, the light -- more than the temperature -- sent the alert to my animal being. Yesterday was a brilliant clear day, and the sunlight was bright and warm, even though temperatures were chilly.

I went to the Zendo in the morning for our first service in the new space. It’s a nice space but it felt a bit cramped ("intimate” would be a friendlier way to put it). Yesterday we had unusually high attendance, though -- I doubt it will feel that tight during the course of a normal week.

Then I zipped out to Brooklyn to meet my friend Bryn for lunch and exploring in Greenpoint. We found some great graffiti and later Bryn’s partner Jeff made dinner, which was fabulous. Greenpoint is an interesting neighborhood, traditionally Polish but, like much of New York, changing and gentrifying. It was nice to be outside in that bright slightly spring-ish sunlight!

(Photo: Greenpoint, Brooklyn, yesterday.)
Posted by Steve Reed at 11:38 AM