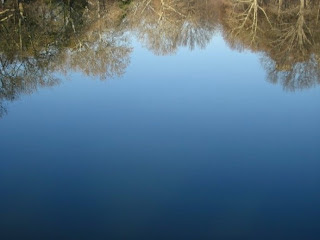 Well, voting was hell yesterday. Not in terms of crowds or disorganization -- though there were both -- but in terms of the choice that needed to be made.

I was on the fence between two candidates right up until I pulled the lever. All morning, as I worked out at the gym, showered, dressed and ate breakfast, I weighed the pros and cons of each in my mind, and I went back and forth several times -- just as I have for the past several weeks and months. Two very different people with different approaches, and both appealing in their own ways. It was a sort of right-brain, left-brain dilemma -- and which side of my brain should I listen to?

I did make a choice, obviously. And almost as soon as I did, I rued what seemed lost by not voting for the other candidate. But I also know if I’d voted for that one, I’d regret what I’d lost by not choosing the first.

What a luxury, when you come right down to it -- two candidates strong enough to make me WANT to vote for them!

(Photo: Trees reflected in the Conservatory Water, Central Park, Feb. 2008)
Posted by Steve Reed at 10:54 AM