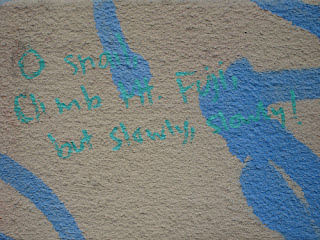 According to Wikipedia, this haiku is by Issa, and was used in J.D. Salinger's "Franny and Zooey." I found it scribbled on a wall in Brooklyn. It's a good prescription for handling huge tasks: little by little, step by step. Unfortunately it doesn't address the frustration we sometimes feel when things go too slowly!

I went to see another documentary film last night, this one a finished product by a friend of mine. It's called "Passing Poston," and it's about the disastrous internment of Japanese-Americans during World War II. It also explores how one of their camps, on an Arizona indian reservation, actually helped the Native Americans. The U.S. government arranged to have the Japanese housed there to justify public expenditures on infrastructure on the reservation, and Japanese labor built structures later used by the indians. Of course, the whole experience was still terrible for the Japanese-Americans. It's a very interesting movie.

On the way home on the subway, I saw one man reading this and another reading this. So we know at least one copy of each book was sold.