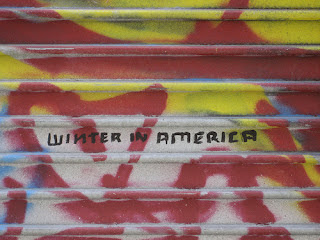 Wow! What a weekend! I’ve had the busiest social schedule EVER. I was out for every meal: Dinner with Jan and Marcus on Friday; brunch with Kate and Katherine on Saturday, along with some pals of Katherine’s from Switzerland; dinner and a play with David and Gregg Saturday night; brunch with Mark and two of his friends on Sunday; and dinner with Sybil, Jesse and Nina last night. For me, that’s very atypical. I’m usually enough of a homebody that I stick around the house for a peanut butter sandwich at least once during the weekend.

On top of all that, I did lots of walking and exploring. Katherine, Kate and I walked all through Williamsburg, Brooklyn, possibly the richest repository of street art in the entire city, on Saturday. I probably took about 200 pictures, and edited them down to 120 or so for Flickr. We found some really great stuff.

And yesterday, when the weather turned warmer and we had a beautiful clear, blue sky, I walked from 16th Street in Chelsea to 77th Street on the Upper East Side, cutting a diagonal across midtown and resting with a book by the boat basin in Central Park. More great photos!

The Super Bowl is a non-entity in my life, but last night as I lay in bed, the city suddenly seemed to go wild. When there’s any big game I can occasionally hear crowds cheer, but this was different -- a sustained bout of yelling and horn-honking. I thought, “Well, we must have won!” It went on so long that I got dressed again and walked up the block just to see what was happening -- and it was pretty much madness all around, people running around in the street and spilling out of the big sports bar on the corner of Third Avenue. I could never get that enthusiastic about football, even with a few beers in me, but it was fun to watch. Go Giants!