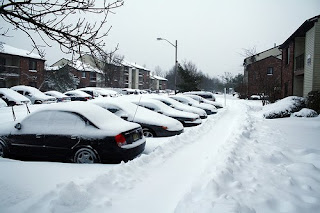 Well, there was mass panic about this weekend's heavy snowfall, but we managed to survive unscathed. All the blogs were joking that it was going to be "apocalyptic," but it turned out to be merely inconvenient. I think we got a little more than a foot of snow here in East Brunswick -- not nearly as much as some places to the south.

Dave and I stayed in all day Saturday, planning a Christmas baking spree and watching movies. The snow began falling about noon, I think, and it kept snowing through the night. By Sunday morning, when I took the dogs out early, it was up to their bellies. They leapt like deer through the drifts, which was pretty amusing to watch.

Late yesterday morning I began to get a little stir-crazy. I just couldn't handle any more television. So I borrowed a shovel from a neighbor and dug out the car, and drove off to the gym. Mind you, I have never shoveled snow before, nor driven in snow. So this was a first on two levels! I was pretty proud of myself for being so intrepid, and there were several other intrepid souls in the gym with me, so I wasn't the only one getting cabin fever.

After the gym I came home and we resumed our holiday baking (it's really Dave's baking). We made pfeffernussen, which is a kind of spicy cookie, and chocolate-covered nut clusters and candied citrus peel. We have some sugar cookies to make, too, which maybe we'll do today or tomorrow. 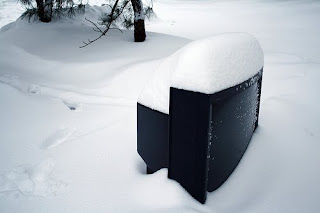 This photo gives a whole new meaning to getting snow on your TV screen!
Posted by Steve Reed at 12:26 PM

boy you couldn't handle any move tv - but don't you think banishing the tube to the curb was a bit extreme!

we are feeling a bit gypped here in cleveland and only got a measly couple inches! yeah, I'm warped, but I do love a BIG SNOW (at least if I'm not planning any travel)

I can't believe you made it this far in life without shoveling snow or driving in it -- both privileges I could give up forever!

This snow we paid some Hispanic guys to shovel and I have not driven anywhere yet.

Better keep that gym membership with all that butter and sugar! Ha!

Oh, you Easterners are such wimps ... that's just a typical June day out here. :-p

They call that 'clear weather' in Colorado.

Chilly here, but no snow. Congrats on those firsts and enjoy the holiday baking.

cold here in NE Ohio, but just a dusting of snow on this solstice.

I love shoveling snow, though ... that said, I've had my fill of it this week.