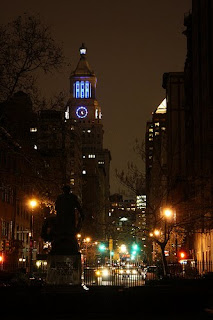 I've been gradually adapting to the idea of being jobless. My initial panic has subsided and I'm now in a "this might not be so bad after all" mode. As I've said before, I have enough cushion to live for a while -- so why not take a bit of a break?

My coworkers have responded in a variety of ways. The best response so far came from a woman named Phyllis who works on our floor. I've known her the whole time I've worked here and she knows my boss even better, but I wouldn't say she's a close friend -- more of a colleague. So it surprised me when she asked to take us to lunch on Tuesday, and proceeded to treat us to a truly memorable meal!

We went to Marseille, a French place on Ninth Avenue. Phyllis suggested cocktails right away, and we all got martinis. Then she generously suggested everything from appetizers to desserts, as well as a second round of drinks. We finished lunch THREE HOURS later!

To make the day even more memorable, Glenn Close was sitting across the restaurant from us. We didn't speak to her, of course, but celebrity sightings always liven things up. (Wonder if the restaurant serves rabbit?)

I am so impressed with Phyllis' generosity and kindness. When I first started work in New York about ten years ago, we had luxurious meals with our senior editors every once in a while. But as the company began trimming expenses, those little luxuries vanished. It was great to revisit the old days -- too bad it wasn't once again at company expense!

(Photo: Gramercy Park at night, looking toward Irving Place and the Con-Edison building.)
Posted by Steve Reed at 4:24 PM