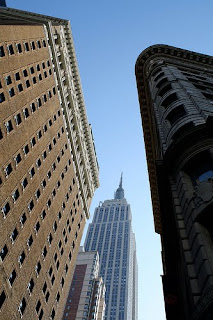 For a couple of months I've heard all sorts of banging and grinding coming from East 30th Street, the next block up from my apartment. From my window I could see that two buildings were being renovated, and a big scaffold was erected in front of a third building in preparation for some kind of project.

I didn't think much of it. Renovation in New York City is pretty much a constant process, after all.

But last night I learned that the latter building is actually being demolished entirely -- and a new, 11-story structure will take its place. (With 11 apartments -- must be nice to have a whole floor to yourself!)

Unfortunately, this new structure will rise directly in front of my celebrated view of the Empire State Building (which I've depicted here, here and here). Sometime early next year, my view will be no more. Well, I'll still have my courtyard and my horse chestnut tree -- at least for now -- but the view that actually prompted me to buy my apartment in the first place will be gone.

I'm sorry to see it go, but there's nothing I can do about it. That's just the way things go in the city. Besides, I've been lucky enough to enjoy that view for more than seven years, so I can't really complain.

My friends see this as yet another sign that it may be time for me to leave New York behind. I don't disagree. I swear, between my cat, my job and this, I've never received such loud and clear signals from the Universe before!

(Photo: This is not the view from my apartment -- just another random shot of the Empire State Building. I didn't have another photo taken from my window. But you can see the ESB from that angle by clicking the links above.)
Posted by Steve Reed at 6:52 PM