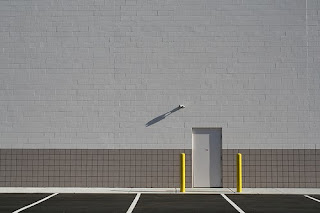 Typing the title for this post reminds me that when I was a kid, the public television station in Tampa used to broadcast what it called a "musical interlude." My brother and I would be waiting for Sesame Street or The Electric Company to start, and there would be a black slide with multicolored instruments displayed on the screen with those words, and tinny music coming from the speaker. I guess they did it to fill time between shows. Seems pretty old-fashioned, doesn't it?

Anyway, I hope you've enjoyed the excerpts from Dogen's "Eight Awarenesses of Great People" the past few days. I plan to post all eight of them. I've always found this essay inspiring and motivating.

I've returned to slightly more active practice this week, after watching the beautiful movie "Spring, Summer, Fall, Winter, Spring" over the weekend. I saw it in the theater years ago, and I wanted to show it to Dave, because I thought it might help him (and me!) understand some things about Buddhism. (I say "slightly" more active practice because, while I've been reading about Buddhism a bit more and trying to be more mindful of my day-to-day reality -- walking more slowly, being more observant -- I still haven't returned to sitting.)

People often ask what Buddhism is about, and I've been taught that it can never truly be described -- only practiced. The minute someone tries to describe and define it, they've destroyed it. Dogen, however, manages to define some of its essential qualities in a way that makes me want to practice more diligently.

Practicing, however, did not stop me from having a fantastic gin & tonic when I got to Dave's last night! I took the bus from the city and then walked from the bus stop to his apartment -- it's a longer walk than would be practical every day (about 40 minutes) but it's manageable when he's tied up and can't get me with the car. I'm here to see a holiday concert tonight where he performs with handbells. Should be fun!