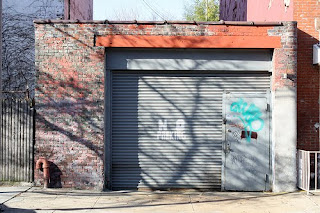 Christmas was a lot of fun! Dave and I started the morning with presents -- I got a zoom lens for my camera, which will be great for shooting graffiti high up on the rooflines of buildings! I also got Barbara Kingsolver's newest novel, "Lacuna"; a boxed DVD set of all the "Absolutely Fabulous" episodes ever produced; a comfy pair of Merrell slip-on shoes; a pair of running shoes; and three gift certificates for massages at a spa in New Brunswick (plus optional pedicure). What a haul!

Dave got a mandoline (device for finely slicing vegetables), a food mill, a cast-iron skillet, several DVDs of movies he likes, Julia Child's book about her life in Paris, and a Le Creuset pot. (Plus an assortment of clothes from his parents, some successful and some not.) I also told him I'd buy him a rack for organizing his extensive DVD collection, and frankly that gift is as much for me as him, because right now the DVD closet is a mess and it makes me crazy.

After gifts we watched several shows on TV, took the dogs for a walk, and came back and began making dinner. Dave made an apple pie, and later, after it was in the oven, we discovered the new jar of cinnamon hadn't been opened -- which made Dave wonder what he'd put in the pie! Turned out to be an extra dose of nutmeg, but it tastes great all the same.

For dinner Dave made a pork roast stuffed with fennel and apple; I made my mother's famous sweet potatoes, which this time worked out perfectly, unlike Thanksgiving; and swiss chard. In between cooking we watched "War Games," a great old '80s movie that reminds me of my high school years.

Today we're off to the city to see a performance of "The Nutcracker" with my friend Arne and his partner, who are visiting from D.C.

Nearly all the snow in yesterday's photo has now disappeared beneath a slow but steady patter of rain. That field is all grass once again!