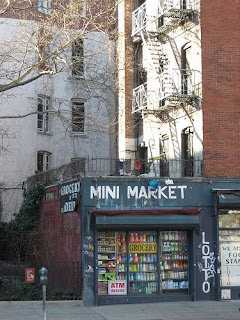 I was up until 12:30 this morning defrosting my freezer. What's up with that?! Why am I the last person on the planet to own a freezer that requires defrosting? I have a miniature college-sized refrigerator, and it builds up ice like crazy. You should have seen the huge, Titanic-sinking bergs I took out of there.

Defrosting involves a lot of down time, which I spent combing through my earliest digital photos, from 2005 and 2006. I found a few old street art shots that I'd never posted to Flickr, and some other interesting stuff (like the shot above of a market in Greenwich Village, from February 2006). It's all up on Flickr now.

I mostly have the holidays under control, but only because I defaulted on nearly all my holiday responsibilities. I decided not to send cards -- thus saving both paper and postage -- and I'm buying extremely minimalist presents for just a few people. (Except Dave, who's getting a standard haul.) As I think I've mentioned before, I'm also not traveling this year, so I don't need to worry about getting myself to Florida and back as usual. Instead, I'm spending Christmas in New Jersey, which will be terrific.

Fortunately, my family tends toward minimalism over the holidays, so this isn't a huge departure. And Christmas cards, well, they just seem hopelessly outdated. They were once valuable for staying in touch with people who otherwise would vanish into the mists of time, and I sent them every year. But in this era of Facebook and e-mail, do we really need them? Methinks not.

Yesterday was my final day in the office. I'll continue to check my e-mail until the 31st, which is technically my final day of employment, but I'm pretty much done with work. So I'm going to spend more and more time in New Jersey, getting on with the next phase of my life.
Posted by Steve Reed at 9:26 PM