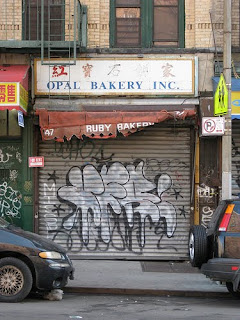 "According to the cosmology of Thomas Moore, it's OK to be complicated. It's OK to be sad, too. Being 'normal' doesn't really do much for anyone except deaden the connection to the soul. Being present, according to Thomas Moore, means being aware not only of what's right in front of your face, but also hanging out with memories, hopes, worries, and the imagination, all of which accompany us every second of every day."

I don't know anything about Thomas Moore, but I so appreciated these words, written yesterday by my blog sister Reya. I am very bad at being sad. I often push away "negative" feelings such as sadness or anger, believing them to be unproductive or harmful. I come from the "if you can't say something nice" school of thought, whereby only "positive" expressions are allowed, even to myself.

It's bizarre, because this impulse runs so contrary to my Buddhist practice (such that it is these days). Zen emphasizes being in the moment, feeling what's there and not turning away from it. Even though I understand that on an intellectual level, being there, really being, is hard.

The other day, Dave was talking about some classroom issues that have him stressed out. He turned to me and said, "What stresses you out, anyway? You're never stressed." I said I could be situationally stressed, such as when I'm driving down the New Jersey Turnpike and my gas tank contains only fumes (which in fact happened to us just a day or two earlier), but that I wasn't easily stressed on a deeper level.

That's not really true, though. I am stressed by my joblessness, my hazy future, my neither-here-nor-there living conditions. I just don't readily allow myself to see the stress, or to express it. I keep going to the gym and try to do useful stuff around the house, to maintain a sense of control and self-worth. (I guess this is probably pretty common among the jobless.)

That control, though, can be soul-deadening. If I'm honest with myself, I've been feeling down lately. I miss the city and the creative spark it gives me -- it's honestly hard to keep up my level of daily activity and creativity here in the 'burbs. There's just not as much stimuli. Also, so many of my habits have changed -- I'm eating more red meat and ice cream, sitting less, watching more television -- and I miss some aspects of the "old me." I think perhaps I need to be more conscientious about staying in touch with myself, and making sure I get into the city more often.

And I need to let myself be down now and then, if that's how I honestly feel. I'm alive, and I need to experience my life, whatever it may be!