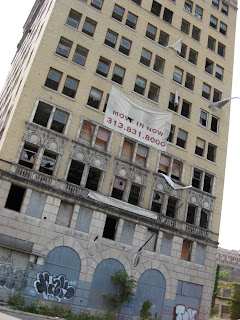 We went into downtown Detroit on Monday and explored a bit. We took the dogs with us, so we were a bit limited in terms of where we could go. No plush hotel lobbies! No martinis!

Dave's dad had suggested we check out the riverwalk, a beautifully landscaped path that runs along the Detroit river. So we parked near the Renaissance Center and walked north to a small park, where we had a hot dog and sat out enjoying the day. My hot dog had just about everything in the world on it -- tomatoes, hot peppers. Dave called it "Chicago-style," which seems a bit municipally insulting when I'm eating it in Detroit, but whatever. We're all one, right?

We popped into the Renaissance Center so I could stop by Starbucks for a Detroit city mug. Then we drove west of the city to find the headquarters of the orchestra, and we passed through some dicey-looking areas where graffiti was plentiful. I got out of the car several times to shoot interesting stuff. I wish I could go back and spend more time there, but I didn't want to drive Dave crazy and I'm not sure when I would get back on my own. (Or even if it would be safe.)

We also took a drive through Dave's hometown of Grosse Ile. Then we spent yesterday cleaning out some boxes Dave has stored here -- old photos and yearbooks and stuff. We kept the memorabilia, but also loaded lots of bags for Goodwill. It's fun learning more about Dave's past and seeing it all first-hand!

(Photo: One of the buildings we encountered in the dicey part of town. Move in now! To be fair, most of downtown Detroit looks much better than this.)
Posted by Steve Reed at 11:55 AM

i hope you will be able to get to the detroit institute of arts to check out the diego rivera murals! they are amazing!

we have no wanders in the immediate future so if you are coming through cleveland, give a ring - better yet, maybe you, dave and the dogs will want to add a cleveland stop to the road trip.... all beings welcome on avenue c!

Make sure to eat a "Coney Island" while you are there. It's a hotdog bun filled with ground meat and secret seasoning. Probably bad for you, but we have one most every time we visit.

Glad you are finding more life in downtown Detroit than I remember.

Your hotdog sounds great - whatever city it's named after.

I think it's fun to go back & look at other people's stuff. It's interesting to see what helped shape the person they are now.

What a perfect vacation.