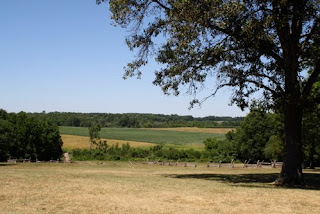 Yesterday morning Dave said in a chipper voice, "Let's do something fun!" (Famous last words.) We considered the local options and decided to visit Monmouth Battlefield State Park, in nearby Freehold. We thought we'd take the dogs for a walk in the countryside, and maybe learn some history along the way.

The only thing I know about the Battle of Monmouth, a Revolutionary War conflict, is that it gave birth to the legend of Molly Pitcher, a woman who selflessly lugged water to the American troops. Turns out the battle occurred on June 28, 1778, so we were just a few days past the anniversary.

We drove to the park via a circuitous but scenic route, through historic Englishtown, and when we got to the visitor's center I picked up some maps of walking tours. We set out on the shortest one, thinking that might be all our aged dogs could tolerate.

Almost immediately, we were completely confused. We were walking a dusty path through a parched-looking cornfield that led to an orchard, but we weren't seeing any markers or signs that we were on the right track. To make matters worse, the brochure was written in painstaking detail about troop movements and whatnot, when I needed something that gave me a simpler overview of the battle. And the map was terrible. I couldn't make heads or tails of anything. 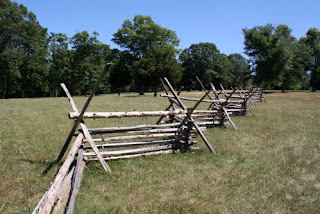 I asked some of the teenagers working at Battleview Orchards, a u-pick operation in the park, and they couldn't figure out the map either. Finally I realized we'd started at the end of the trail, not the beginning.

About this time, the dogs -- already panting heavily -- began to look a little distressed. It was about 90 degrees, and because we're idiots, we hadn't brought any water along. We'd decided to return to the visitor's center when Ernie plopped down in the middle of the path and let it be known he wouldn't be walking further.

Dave went for the car, thinking he could come and get us via the service road for the orchard. (Other cars had driven by.) But almost as soon as he left I knew he'd never be able to find us, so I called him and told him to stay at the visitor's center.

I parked the dogs beneath some apple trees and let them rest in the shade. Eventually they were ready to move again, and for the next half hour or so, I coaxed them through the orchard and along a line of forest, stopping occasionally to give them a break. I realized what I needed more than anything was Molly Pitcher! Where the heck was Molly Pitcher?

Finally we got back to the center and met Dave, and gave the dogs some water. Poor Ernie didn't stop panting for about five hours. What a fiasco!
Posted by Steve Reed at 10:23 AM

Where the hell was Molly Pitcher indeed!

I'm glad everyone survived your Walk From Hell. Jim and I have taken several of those, and it always feels like a relationship milestone to have survived such an experience without having a huge fight, etc.

What a great illustration, though, of the real value of Miss Molly. It's easy to pooh-pooh such legends, minimizing women's role in early American history by saying women "only" served as cooks, nurses, etc. But bringing water to the troops was a real contribution, as you now know firsthand. Hooray, Molly!

I'm glad you all made it back, and as Lorianne points out, it could not have been a better example of the service of Molly Pitcher.

This reminds me of the time when 80-pound (black lab) Dylan got very cold paws after a long walk in the snow to the grocery store. Dan was ready to carry him home on his back, but after warming up for a bit inside the store, he agreed to walk home.

You feel so helpless in a situation like this, don't you? You certainly don't want to bring harm to your animals, but at the same time that hardly looks like a place where I would want to stay too long.

Walking along the Hudson in 90+ degree heat yesterday, I understood your dogs completely! Happy Fourth!