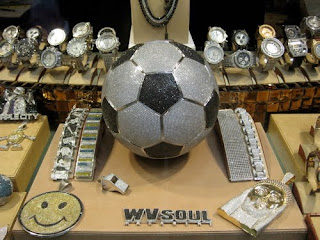 I haven't paid a whole lot of attention to this year's World Cup soccer games. I don't follow soccer, or any other sport involving a ball, but I like the enthusiasm that the World Cup creates around the world. I recently came across this bejeweled soccer ball in the window of a jewelry store in New York's Diamond District. Given the tawdriness of the surrounding bling, I doubt they're real jewels -- but it's still pretty fun.

The only World Cup game I caught so far was when the United States beat Algeria. I happened to be running on the treadmill at the gym and the game was on TV there, so I was a captive audience. And I have to admit, it was fun to watch -- partly because those Algerian players were hot.

Speaking of hot, man-oh-man, the temperature here is unbelievable. It's better today than it was yesterday, I think, but going outside still feels like stepping into an oven. I'm pretty much staying inside in the air conditioning, with occasional forays to my air-conditioned gym. I wonder how I ever tolerated summers in Morocco, where I had no air conditioning and the temperatures were surely comparable to these. I guess I was just younger and tougher!
Posted by Steve Reed at 8:26 PM