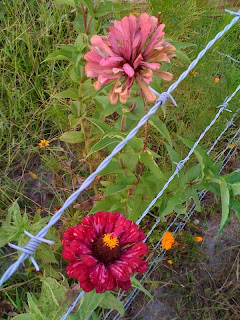 I'm at the airport with Dave, about to take off for Newark and home. We're both ready to return to real life, and to poor Ernie and Ruby, who have been staying with friends while we've been gone. We've received assurances that they're doing fine, but we miss them and I'm sure they're anxious, being away from home.

This has been a fun visit. My family and friends all seem to like Dave and everyone's been excited to hear about our impending union. My dad asked me this morning if I was nervous, and at first I thought he meant about the flight home -- I'm so not nervous about the union itself. (As one of my blog commenters pointed out, though, I probably would be a lot more nervous if we had a big, elaborate ceremony planned.) 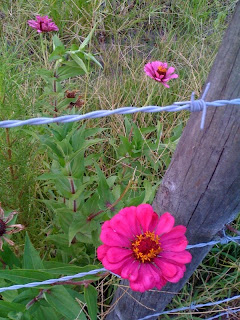 Our time in Anna Maria was fun, but I have definitely become a Yankee where my skin is concerned. If I was ever used to the intense Florida sun, that's subsided over the years I've been in New York. Every time I stepped outside it felt like a blast furnace. I think my friend Sue was a little frustrated that Dave and I spent so much time inside, but after about 9 a.m. and before 6 p.m. I just couldn't stand to be in the sun!

We did have a fun day going to garage sales on Saturday. For some reason, Anna Maria has the best garage sales in the world. Sue is quite an aficionado, so we piled into the car early Saturday morning and scoped out the scene. I got some fun stuff -- cute salt and pepper shakers shaped like cats (am I a 90-year-old woman?) and a pulp mystery paperback from the '50s.

Yesterday Dave and I went to an outlet mall near Bradenton. We heard there was a Le Creuset outlet there, but none of the cookware was much of a bargain, so we didn't buy any. I did pick up a few items at the Banana Republic store, though. I'm going to go home and throw out some of my old stuff -- one pair of shorts in particular, cut-offs I made from the pants of an ex-boyfriend about seven years ago. I don't really need to wear those anymore.

(Photos: Zinnias along a fence in Land O' Lakes, near my mom's house.)
Posted by Steve Reed at 2:20 PM

ernie and ruby are going to be soooooo happy to have you home!!

hope the weather is sweet and cool when you get home; compared to florida's 'blast furnace' feel it won't take much to feel sweet and cool.

You have to remember that the ozone layer is very thin now, so the sun is much stronger.

Glad you had a great trip and so glad that you're headed home. The dogs will be so glad to see you!

Yep - get rid of those shorts! Why, you could have a symbolic burning. Or maybe not, with the heat & all.

Glad you had a good time.

Somehow I missed out on the impending union. I'm so excited for the two of you!

I know what you mean about missing your dogs. Every big dog I see here makes me want to see my Jake. I'm sure he is enjoying his stay at my neighbor's house where he gets Purina Dog Chow and rawhide, but I miss him terribly.