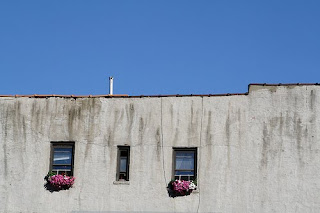 I went into the city yesterday afternoon to line up at TKTS for discount tickets to "Promises, Promises," with Sean Hayes and Kristen Chenoweth, on Broadway. Fortunately it was a beautiful day, so standing outside in Times Square for an hour wasn't the torture it could have been.

I've wanted to see "Promises, Promises" for years, ever since I became a fan of Dionne Warwick's '60s renditions of many of the Burt Bacharach and Hal David songs in the show ("Knowing When to Leave," "What Do You Get When You Fall in Love," "I Say a Little Prayer," "A House Is Not a Home," and the title song). The original show ran on Broadway from 1968 to 1972, and it's never been revived, until now.

I'm happy to report that the show is a joy to watch, especially for someone like me who reveres '60s styles and design. The sets brilliantly capture the clean, modern aesthetic of office space in the early '60s, the costumes are colorful, the dance numbers energetic and tightly choreographed. I think Hayes did a great job as the lead character, a forgettable accountant in an insurance firm, and Chenoweth does well as his amoureuse, though her singing voice can get a bit piercing. A supporting actress named Katie Finneran literally steals the show as a drunk and overly willing conquest of Hayes' accountant.

Dave came into the city to meet me for the show. We went to Chipotle for a cheap burrito, to save money, and then killed our budget by going to the Cellar Bar in the Bryant Park Hotel for a glass of wine. (I used to like that bar, but last night it was pretty crowded, and kind of thumpy, musically.)

I also stopped by my apartment, which looks the same as the last time I was there, a few weeks ago. I cleaned out the mailbox, which despite my forwarding orders had accumulated a stack of mostly useless mail. Chatted with one of my neighbors, who said they miss me in the building and on the co-op board. It's nice to be appreciated, even belatedly!

mention of the line for tickets, reminded me to tell you katie once more got tickets via the virtual line for shakespeare in the park!!! last week her and pam when to see al as shylock in the merchant of venice. she said she's successfully gotten tickets each year - so no line!

i did register most of the days i was in town, but luck didn't come my way - but probably just as well as i don't know how i could have squeezed it in!

am sure your old neighbors miss you!!

I really want to see Promises, Promises and am hoping it sticks around through the summer because I do not plan on getting into NYC until September. About a month ago I was debating between Hair and Promises, Promises and Hair won. I love that musical (and I remember you wrote about seeing it in the park) but I thought the show itself was disappointing. It didn't have much of a story line and I found the movie - which kicks ass - to pack much more of a whallop.

The summer of '68 was memorable to me for two reasons: learning how to cook from my older (23) roommate and listening to a Dionne Warwick album so many times that I had memorized all the songs. There were less memorable things too, like my bicycle getting stolen and getting caught seducing my boss's younger son (16). All in all in was a great summer though! That music is so appealing.

Any nibbles on your condo?