Brunch in the City 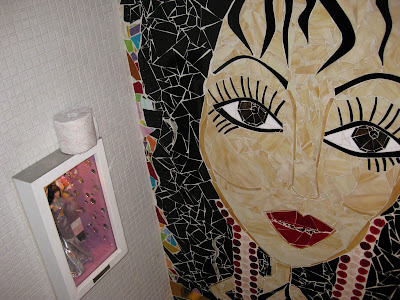 Yesterday I took a train into New York with my friend Bill to meet two other mutual friends, Dan and Carl, for brunch. I haven't seen Dan and Carl in months, and I really wanted to catch up with them before our move. (They, as well as Bill, are longtime journalism pals.) So we arranged to meet at Vynl on Ninth Avenue, in the heart of the mostly gay Hell's Kitchen neighborhood, because Dan said he wanted to go somewhere with "boys and margaritas."

Dan definitely got his wish. Hell's Kitchen seemed even gayer than usual, probably because it's Pride Weekend. The big march is this afternoon, and it's sure to be a crazy scene of celebration following New York's approval of gay marriage this week.

Anyway, we got caught up on all our news and had a fun time with bloody marys and mimosas (curiously, I don't think any of us actually ordered a margarita). I got something called the Vynl Scramble, which purported to contain watercress, but was basically just scrambled eggs flecked with unidentifiable green vegetation. Not bad, but not watercress-ish, either.

I always get a kick out of the bathrooms at Vynl, which as you might expect is themed to celebrate records and the music industry. Each of its four bathrooms is dedicated to a singer: Dolly Parton, Elvis, Nelly and Cher. Each features a huge tile mural and a glamorously costumed doll of the honored artist. (I assume so, anyway -- I didn't go inside the Dolly and Nelly bathrooms.) Above, for example, is Cher's special bathroom, and here are scenes from the Elvis loo: 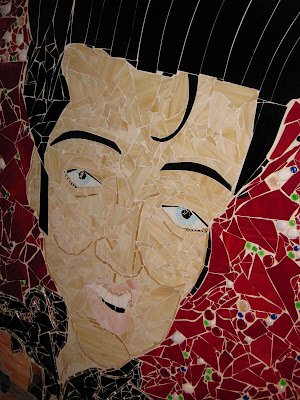 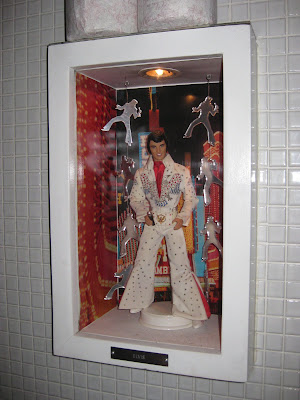 It was only after I'd come back to East Brunswick that I realized this was probably the last time I'll go into New York. We've got some things to do today and tomorrow, both fun and not, before Dave's parents show up tomorrow night.

Both Dave and I are ready to go. Now that most of our belongings have been shipped, we feel like we're just kind of hanging around, and that lingering feeling can be frustrating. This entire adventure has been one long goodbye.
Posted by Steve Reed at 4:46 PM

How about "the last time I'll go into NY before spending a few years in the UK"? Otherwise it sounds so final.

Don't you still have to drive Florence to FL? I'm assuming you are leaving from there.

The bathrooms are great! I love restaurants that care enough to make their bathrooms interesting.