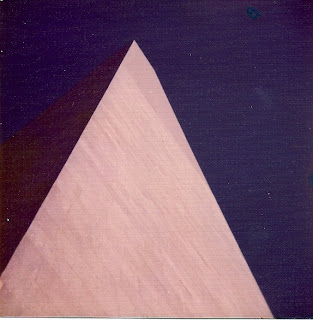 More photo scanning! This is one of the first abstract photos I ever took. I was at the Washington Monument with my family in 1976, and I stood with my back to the monument and bent over backwards to take a shot looking up. Everybody talked about how cool this photo turned out. (Three weeks later, that is, when we finally developed the film and got the photos back -- how did we ever stand that delay?)

My biometric appointment yesterday went smoothly. It was nothing like what I expected. I thought I was going to an office that processes exclusively British visas -- I pictured a small office with one or two people, who would be drinking tea and having crumpets (whatever those are). But no, this was a huge office run by the U.S. Customs and Immigration Service. I guess the UK has some sort of agreement with USCIS to do its biometric screening here in the states. I was literally just a number amid of a crowd of largely Spanish-speaking people seeking to renew green cards and whatnot. Very interesting!

However, the woman just in front of me was there for exactly the same purpose I was. I heard her tell the technician that she was getting screened for a UK visa. I said, "Oh, I am too!" Despite my normal reluctance to be too chatty around federal authorities, we had a little talk about our plans -- turns out she's going to Scotland to study. "The beer is warm in London," she warned me.

I suppose I can live with that.
Posted by Steve Reed at 10:34 AM

I actually like their warm beer. You feel very British hanging out in a pub eating pub food and drinking a pint of warm beer.

I'm glad your appt turned out not to be so difficult. Every time I read the word biometric, it conjures up another image somewhere between bionic and biological. Whatsup with that?

My son has just returned from England, and we have an English houseguest this week. I keep thinking of you, on the verge of changing your life. So wonderful.