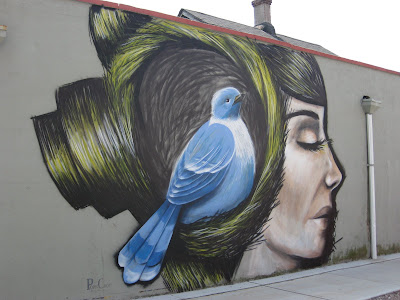 I'm happy to report that my campaign to plan a trip to Niagara Falls has succeeded. Dave agreed to go with me, though I know he dreads the car trip. He hates long road trips, and it's a 7-hour drive from where we live. And this two weeks before we get in the car and go to his parents' in Michigan -- and then we're driving from Michigan to Florida! The poor guy is going to be a wreck.

Planning where to stay was a bit of an adventure, because we're taking the dogs, and that of course narrows our hotel options. I started with Hotels.com, and found what looked like several good places, but I suspected that they were on the Ontario side of the border -- unacceptable for us, because the British Consulate will have our passports and we won't be able to get into Canada. I called Hotels.com and they insisted the hotels I was looking at were on the American side, but when I looked them up on Google maps, they really were in Canada. Ugh!

So I booked a Holiday Inn in a place called Grand Island, which is actually several miles from the falls and definitely in New York.

I happen to like car trips -- I like the changing scenery and driving with my music on. Even better that Ernie and Ruby can come with us!

Have fun! It will be the last time for the 4 of you to experience togetherness in such a small space before you depart. Hot dog breath in summer is always so delightful. :)

Whereas the roar of motorcycles doesn't do much for me, I am totally in awe of Niagara Falls and all such fast-moving powerful water.

My daughter, like you, loves a road trip. Have fun!

BTW, I am not going to be able to come to New York the week after next as I had hoped. I'm moving my practice into the chateau. All the arrows of my attention must be pointed in that direction. I guess I'll have to come visit once you get settled in London, yes? I say YES!

we live 7.5 hours away from our families so I'm used to long road trips. I like making a road trip CD & then guess what song will be next :)