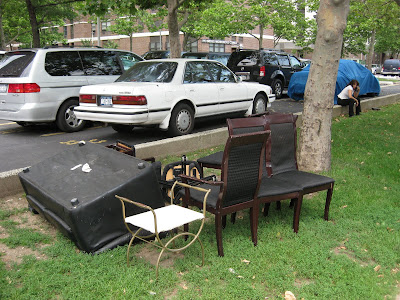 The movers arrive today. We're just putting the last touches on our preparations -- basically making sure that everything that needs to be packed and loaded is in one place, and separated from the stuff we're leaving behind or carrying ourselves. I had a horrible night's sleep, partly because I was lying awake thinking about all the things still to be done.

I took a pretty big step yesterday, recycling my childhood encyclopedias. I've been hauling those things around for four decades, and I finally decided that even taking into account my sentimental attachment to them, saving them was absurd. They were woefully out of date, and my family members didn't want them either. No one could argue that we didn't get our money's worth out of them.

I'm still wrestling with what I should do with certain keepsakes -- yearbooks, old paper journals, letters, photo albums. I was going to store them at my mom's house in Florida, but then I thought, "Why shouldn't I just take them with me now, while the movers are here?" The answer is, because we have no idea how long this London gig is going to last. What if we're back in the states in a year -- why should I have paid to haul such items overseas? On the flip side, what if we never come back?

I'm growing more inclined to move such items today. What the heck. The worst that could happen is I pay to move three or four boxes of extra stuff.

Our intention is to move and stay. So I think I should keep that plan in mind.

(Photo: This is not my stuff! Just a pile of old furniture I passed in New York last Thursday.)
Posted by Steve Reed at 10:33 AM

Encyclopedias are definitely a thing of the past. I used my Comptons for much of the research I did in jr. high school. My children had World Book. My son read every volume cover to cover and, like you, can quote some pretty amazing stuff as a result. But, even with their yearbooks, they were cast in time and not able to really reflect the evolving world. You won't miss them.

You should keep some of the other things you mentioned though. You don't really want your life to start with a blank slate after the move!