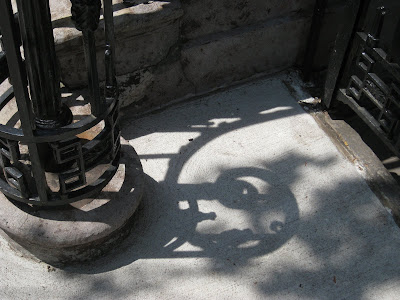 I'm experimenting with Pandora, the Internet music service that programs your own individual "radio station" based on the music you say you like. I cranked it up and entered Joan Baez as my prompt for the type of music I wanted to hear. Pandora has so far done incredibly well choosing similar artists I might like -- Simon & Garfunkel, Jim Croce, Kate Wolf, Judy Collins. It's been a lot of fun to see what will come up next. I only questioned one choice, a foray toward country with a selection by Emmylou Harris. But I could even live with that. And it's free!

I also went ahead and bought an Internet subscription to The New York Times. When they first started their online subscriptions, I was hesitant to buy one -- I figured I could get similar news elsewhere. But you know what? That's just not the case. I read other major newspapers' web sites, and they were nowhere near as comprehensive and interesting as the Times. Besides, I want to support the idea that readers must pay for news, which I firmly believe to be true. If news reporting is to survive we have to move away from the idea that news is free for the taking.

So even though the Times laid me off, I'm beating the drum for them. I hope their subscription model works.

I'm going to have to try Pandora. I like to exercise with music and not the same playlists over and over.

I commend you for buying a subscription to the NYT, probably the best newspaper in the US today. I'm sure they wish more people would subscribe. We buy the Sunday paper and there is enough in it to last for days. Supplemented by The New Yorker, I feel like I'm living in NY sometimes.

just heard pandora is now selling shares of its stock.

we just went in on a subscription to hard copy of the nytimes with emma....have been online readers for eons but thinking maybe the extra support will help, even if the times laid off some of my favorite peeps!!!