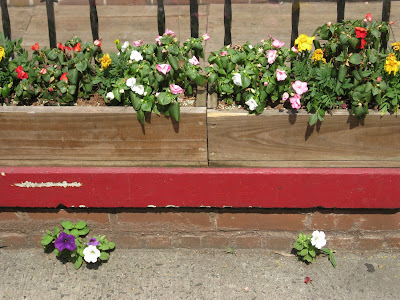 I passed these flowers while walking in the city on Wednesday. I'm so impressed that some of last year's petunias apparently managed to escape the flower box by going to seed and coming up from the cracks in the sidewalk. Who knew ornamental plants had such vigor and tenacity?

My last day at work was relatively uneventful. I wrote two daily stories and was happy to leave with a feeling that I'd done pretty much everything I had to do. There were stories that never got written, which I passed on to my successor, but none of them were hugely pressing. I turned over what information I had about the beat and left about 4 p.m., which got me home before rush hour. Woo hoo!

I feel good about leaving. It seems a little unreal -- as does our entire move, still -- but I'm not particularly sad. Maybe a bit adrift in the vast, empty sea of possibility, but not sad.

Petunias are about the hardiest flowers I know.

I'm totally jazzed about your move. Go ahead, live my dream, you deserve it. xoxo.

I think you always knew this was an interim job. You gave it your best and I'm sure they appreciated your efforts.

I've always felt that when one door closed, another opened. It will be interesting to see what's on the other side.

I hope the 4 of you have a great trip!

Change is exciting. Like the petunias you are jumping into something new and will thrive in your new location. Are you going to continue S&L after the move? I hope so.