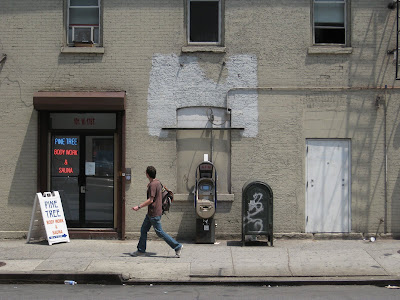 Yesterday I went into the city to visit my doctor. I wanted to get a physical before I head overseas, particularly since I'm going to be giving up my private health insurance. The British assure me that their National Health Service is very good, and I don't doubt it, but I'll feel better having a clean bill of health.

Today is my last day of work. I'm relieved, I must admit -- my office has been in almost constant turmoil since I started last August, with a massive reorganization in February that required us all to reapply for our jobs and the more recent installation of a new computer system. I feel like I've lived two years in the past ten months.

It's been fun reporting again, but I'm not sure I have the same energy for the job that I had when I was younger. Reporting is often a young person's game -- at least at smaller newspapers -- and after you've covered 50 parades/car crashes/city council elections you just lose your appetite for them. They become routine. I found myself fighting an urge to gloss over details that might be new and interesting to someone younger -- and those details can sometimes lead to a better story. My experience made it easier to spot news, but I had to battle a constant fatigue that made me less likely to pursue it.

Also, the economic climate of newspapers these days requires one reporter to cover so much ground, I was left with a sinking feeling that I couldn't keep up. Especially after the reorganization, which expanded my beat to four municipalities and the county government and limited my access to meetings and my face time with sources. I think I did a respectable job, but I was always aware that I was skimming the surface, which left me feeling guilty and a little irresponsible.

I will miss the social interaction of the office. Being unemployed can be an isolating experience, especially now that I've cancelled my gym membership and we're cutting other ties to the community where we live.

It won't suck to sleep in and read more, though.

This is really a big change for you. I applaud the way you are just forging ahead letting things go and hoping for the best. It will be interesting to see how your UK healthcare compares to what you have experienced here. It will probably cost a lot less in any case. It will also be interesting to see what you do with your time now that you have a clear opportunity to start over. I vote for something that makes heavy use of your photography skills!

yes, reporting gets old after a while. i think being and editor has greater longevity, and you still get to do the quick study of new things that makes journalism fun.

Best of luck to you both!