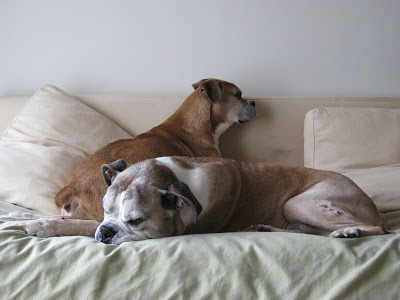 Our preparations for moving are finally coming to an end. On Thursday, the movers will arrive and haul away the many mostly small items we're sending to England (including my art, which you'll remember I was concerned about). A week from now, Dave's parents will come and we'll load up their trailer with everything else -- the pieces of furniture that we didn't sell -- and take it to their house in Michigan for storage and eventual sale.

Dave and I will then drive a few items to Florida in my car, for storage with my family. I'm still not clear on what will go to Florida, because I'm not sure what will fit in my car. It may turn out that we'll leave almost everything in Michigan. Poor overburdened Florence is really not very big.

The dogs appear blissfully unaware of what's happening, as you can see above. They're the most painful part of this process, at least for me. We found a great friend to keep them -- she's been a dog-sitter for us before, and they know her house and her other pets, so they'll have company.

But I'm very worried about how well they'll adapt to our absence, and how healthy they'll be during the next three months. You know Ruby (in rear, above) has had health problems for awhile, with her bad heart and arthritis. And last week we took Ernie to the vet because he's been losing weight, and we learned he has an egg-sized mass in his right lung that's probably cancerous. The vet says there's nothing we can do about it, though we're trying antibiotics on the off-chance that it's just some kind of infection.

As they lie in bed with us at night and I hear them snoring away, so warm and content, I feel such incredible guilt that we're about to shake up their world so dramatically. Ruby in particular seems to know something is amiss, with all the boxes and other changes in our household, and she sticks very close to me.

On the other hand, what are our options? Neither of them is yet in such ill health that we want to terminate their lives. We couldn't very well give them away -- talk about a shake up, and who would want them at this stage anyhow? And we couldn't not go to London just because of the dogs. This is too great of an opportunity for both of us, but especially for Dave.

So we're following the only viable path that I can see. It's very possible that one or both of them will die before we even get them to England, and I hope we don't saddle our friend with the horrible task of making grave decisions in our absence. It's also going to break my heart to say goodbye to them a week from now, knowing it may be the last time I'll see them. They are so completely trusting, and so dependent on us.

This made me cry a little - it really is such a hard decision. Here's hoping that all goes well & that they join you in England without any drama.

This was a real tearjerker...I hope they eventually can come to London...

I really feel your pain as you get ready to separate from your best 4-footed friends, unable to explain to them exactly what the game plan is. I too look at Jake as he sleeps, hoping he will wake up in the morning. I hope everything works out over the next few months and the 4 of you can be reunited across the ocean. But whatever happens, you can always know that you did whatever you could to keep them safe, healthy, and happy.

Is Florence staying in FL?