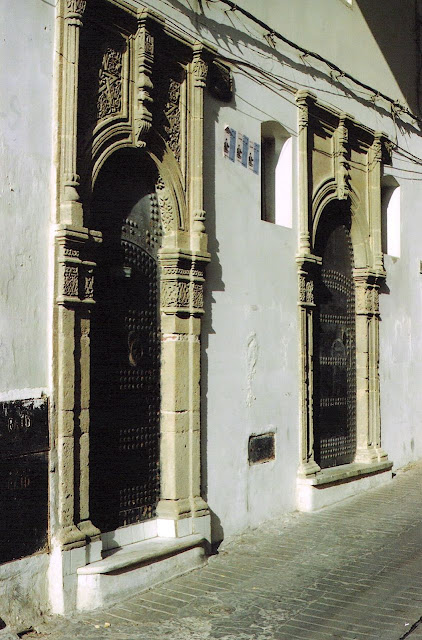 My last morning in Tangier. It's early, about 5 a.m., and the sun has risen enough to give the sky only the slightest pale orange cast in the east. A moment ago it was brighter, but the colors are slowly slipping away. There's a line of heavy gray clouds below the sunrise like a row of frothy mountains -- and below those, the mountains themselves, smooth and lined with strata of white houses -- visible across the bay only as small pale blocks. The bayfront is lit by a curve of orange lights, and the water -- rippled by a cool brisk wind -- is slowly going from gray to green.

Picture all this as a sort of layer cake, visible through a forest of metal TV aerials, past the randomly intersecting right angles of the houses and rooftops before me. Everyone has laundry out, it seems -- almost perpetually. A red & black striped shirt, a polka-dot blouse, a beach towel, all flapping in the wind. Plants stand in rooftop containers of all types, looking a bit bedraggled by this constant Mediterranean wind, hunched, weedy and slightly gray in this light. 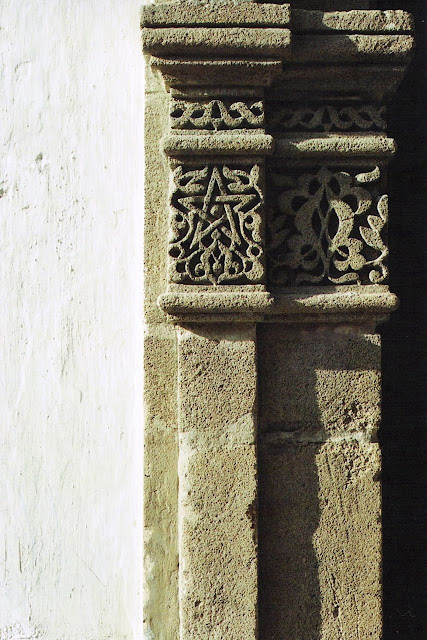 Every so often the metal door to Susan's stairwell swings slightly, emitting a sound remarkably like a foghorn or a ship's whistle -- not really as deep as a foghorn, I suppose. The other sounds are mostly birds -- lots of roosters and a constant background chatter from something else -- sparrows or something. They are noisy, whatever they are, and there are lots of them. Very dimly, I hear the hum of engines -- city sounds -- like a distant droning, unidentifiable -- an invisible motorboat down on the bay?

The wind is downright COLD. I am wrapped in my sheet, drinking coffee, but it's still got quite a bite to it.

Now a big gray cloud over my head has taken on an orange color -- gray with a flank of pale orange -- and man, this cloud is SAILING by -- unfurling, changing, splintering. Swallows are dodging and spinning in the sky, flapping frantically as if trying to escape something.

There are no people, not in rooftops or doorways -- Susan tells me Tangier is not an early morning town...