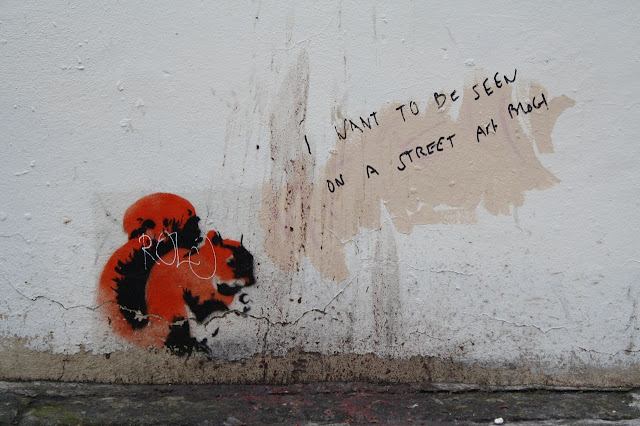 This week has been a little odd. Dave has been in Aberdeen since Wednesday on a school trip, so I've been kicking around the house by myself. I worked several days on that web-site-building job for my former boss. It can be a little scary to work from home on such a focused task -- you can easily find yourself hunched over the computer in your pajamas at 4 p.m.! So I made sure to get dressed and out for a walk or a run each day.

Yesterday I went down to the former site of the Occupy camp at St. Paul's Cathedral. The camp was cleared while I was in Florida and I wanted to see what the site looked like -- and sure enough, the plaza is now big and blank, with no trace of tents or Occupiers. There wasn't even really anything to photograph.

So I began wandering through nearby neighborhoods, and I found this little squirrel stencil (above), pleading for his 15 minutes of fame. I'm not sure this counts as a street art blog, but I thought I'd indulge him anyway. (And yes, I'm aware that he's apparently been vomited upon. Sorry about that.) 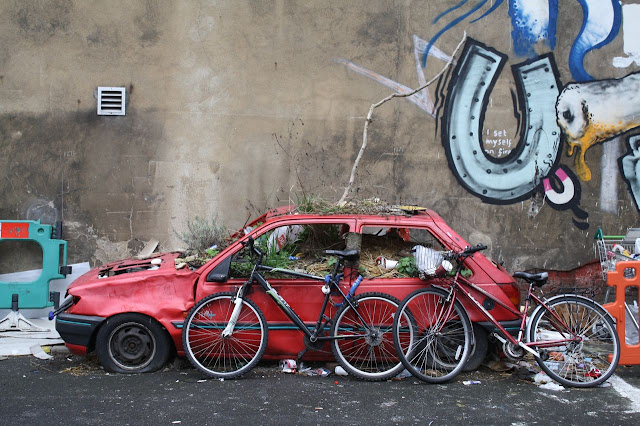 I found the Occupiers at Finsbury Square, not far from St. Paul's, where they seem to have relocated. They had a satellite camp there already, and now the square looks quite, well, occupied. (I still didn't take any photos, though. I guess I wasn't in the mood for global activism.)

Finally I walked over toward Shoreditch, where I found this very strange car behind a building. It appeared to be full of soil or hay or something, and resembled a huge planter. I didn't look too closely. (Has anyone checked to make sure there's not a body under there?)
Posted by Steve Reed at 7:04 AM