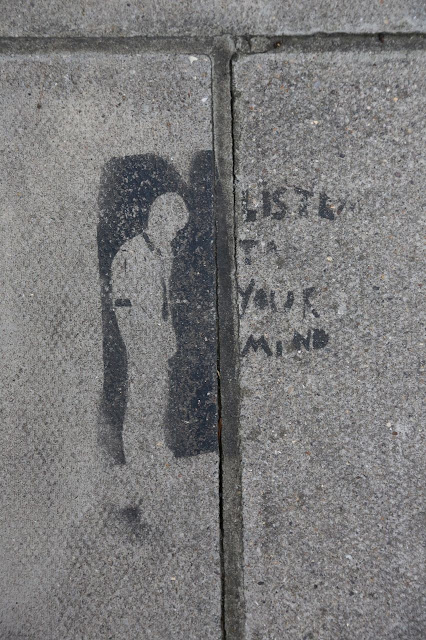 If this stencil is supposed to be someone recognizable, it has failed me. Or maybe I've failed it. I kind of like it, though.

The mindfulness group at work is meeting again this morning, but because they meet before school starts it's really too early for me to attend. (My workday doesn't begin until 9:15 a.m., about an hour and a half later.) We've kicked around the idea of having an afternoon group of some kind. I've said I will lead it, which basically involves just ringing a bell, but so far I've only heard one other person say they may be interested and we haven't worked out any details. For now I'm being mindful on my own!

Last night I lay awake playing conversations with students through my head, trying to imagine what to say to them in circumstances that require a disciplinary voice. As you can imagine, I'm not extraordinarily experienced in cracking down on unruly kids. I need to not rehearse, though, you know? If I do, I'll just sound rehearsed. This is the focus of a lot of my mental energy at the moment, not that the students where I work require an extraordinary amount of discipline. (On the contrary, they're remarkably composed.)

The folks who run our housing estate on behalf of the local government have installed benches in the little grassy yard in front of our apartment building. That sounds much nicer than it actually looks. The benches are these wooden things, sort of spindly, and they've been augmented by stray chairs brought down by other residents. We're starting to look like a used furniture store!
Posted by Steve Reed at 6:41 AM