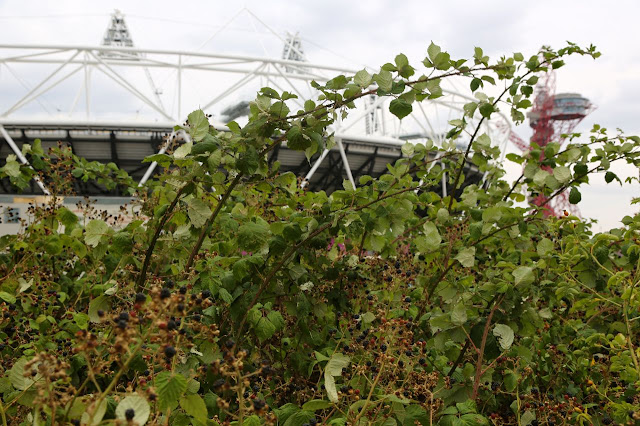 Can you see how many ripe blackberries are on that bush? It's crazy. I found them yesterday when I went to East London -- I walked across the park created for the 2012 Summer Olympics, and as you can see, the berries are growing in the shadow of the stadium and the ArcelorMittal Orbit. I stopped and picked a handful and ate them, but I didn't want to eat too many, because it was a former industrial area and god only knows what's in the soil.

They were good, though. I'll say that much.

The park is now being transformed into a huge public space known as the Queen Elizabeth Olympic Park, criss-crossed with greenways -- pedestrian and bicycle paths. I walked one of the greenways from Stratford to Hackney Wick, a bohemian neighborhood known for its exuberant street art. 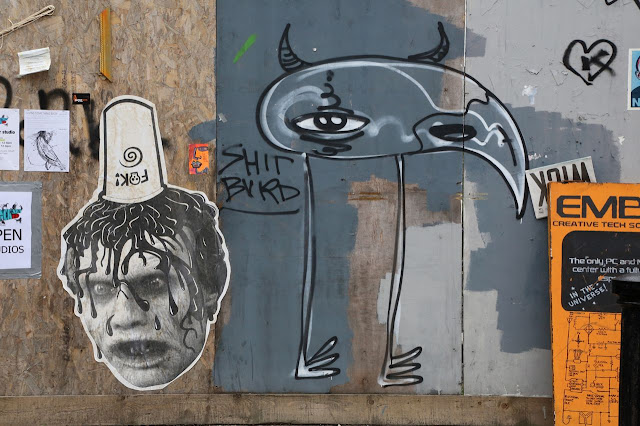 Quite by coincidence, I wound up there during the first full day of Hackney Wicked 2013, an art festival that showcases local artists. There are lots of open studios and galleries to tour, as well as music, food and the inevitable and ever-present street art. I didn't even realize it was festival time, so that was a happy accident.

I stopped in to a couple of the galleries -- where I was sorely tempted by a Malarky canvas, but £300 is a bigger hit to my wallet than I was prepared to allow -- and strolled through the streets checking out the artwork. A cold, windy rain blew up in the afternoon so I headed home after a couple of hours. (I was wearing only a t-shirt and I was chilly -- in August! This crazy English weather.)