Rage on the Stairs 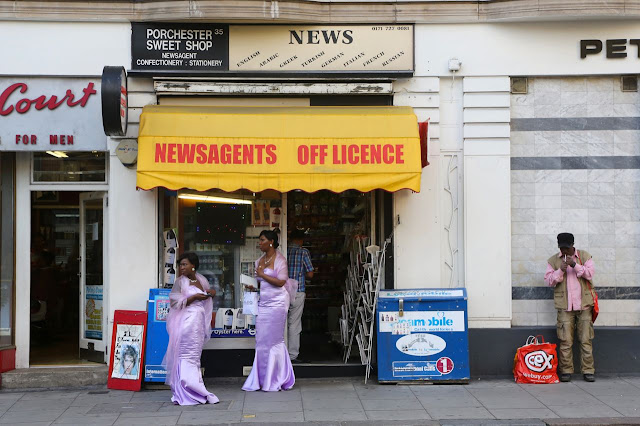 I've been feeling like I need to get back to Buddhism and sitting. I sometimes can't believe how idle my practice has become -- and to think I used to sit every day! It definitely helps me feel less hardened, less hurried, more open, more gentle. Sometimes nowadays I feel downright flinty, without any apparent cause, except my own manufactured sense of urgency. Why, for example, do I feel a need to pull the dog away from sniffing a spot on the sidewalk, so that we can "keep walking." Why not just let her sniff? Why am I in such a hurry?

Why brush past people on the escalator, roll my eyes in annoyance at people wrestling with strollers and suitcases on the sidewalk? The other day I was climbing the stairs out of the tube with Dave, and we were blocked by a young woman looking down at a mobile device, climbing each step at a snail's pace as she texted. "Oh, she's texting," I said quite loudly to Dave as we went around her. "She's oblivious."

I got ridiculously angry. I could taste it. It was like every bit of anger I ever had at the world surged through me -- a feeling akin to road rage. The woman gave no sign that she heard me.

Later, after I'd cooled down, I thought, OK, she shouldn't be texting on the stairs -- but did she deserve to be attacked, albeit indirectly? And would I have said anything out loud if she were a man, more imposing and potentially threatening? I hate to admit it, but I doubt it.

The whole incident made me feel small. It's just one example of the occasional manifestation of my human "beginningless anger," as the Zen Buddhists put it.

Returning to sitting, breathing and focusing, at least occasionally, sounds like a good idea. There's a mindfulness group for staff and faculty at school -- maybe I'll join that. Meanwhile, I am going to go sit right now. Well, as soon as I finish my coffee.

Dave and I watched "Five Easy Pieces" last night, in memory of Karen Black. Only about half an hour into the movie did I realize I'd already seen it. I think I got it from Netflix when I lived in New York. I remembered a couple of the scenes, and one of Rayette's lines, when she's talking about the fate of a favorite cat she left with a friend: "He was squashed flat as a tortilla in front of their mobile home." But I'd forgotten the overall plot, and Dave hadn't seen it, so watching it again was worthwhile.

(Photo: I came across these two women while walking Olga yesterday. On their way to a wedding, perhaps?)
Posted by Steve Reed at 7:20 AM