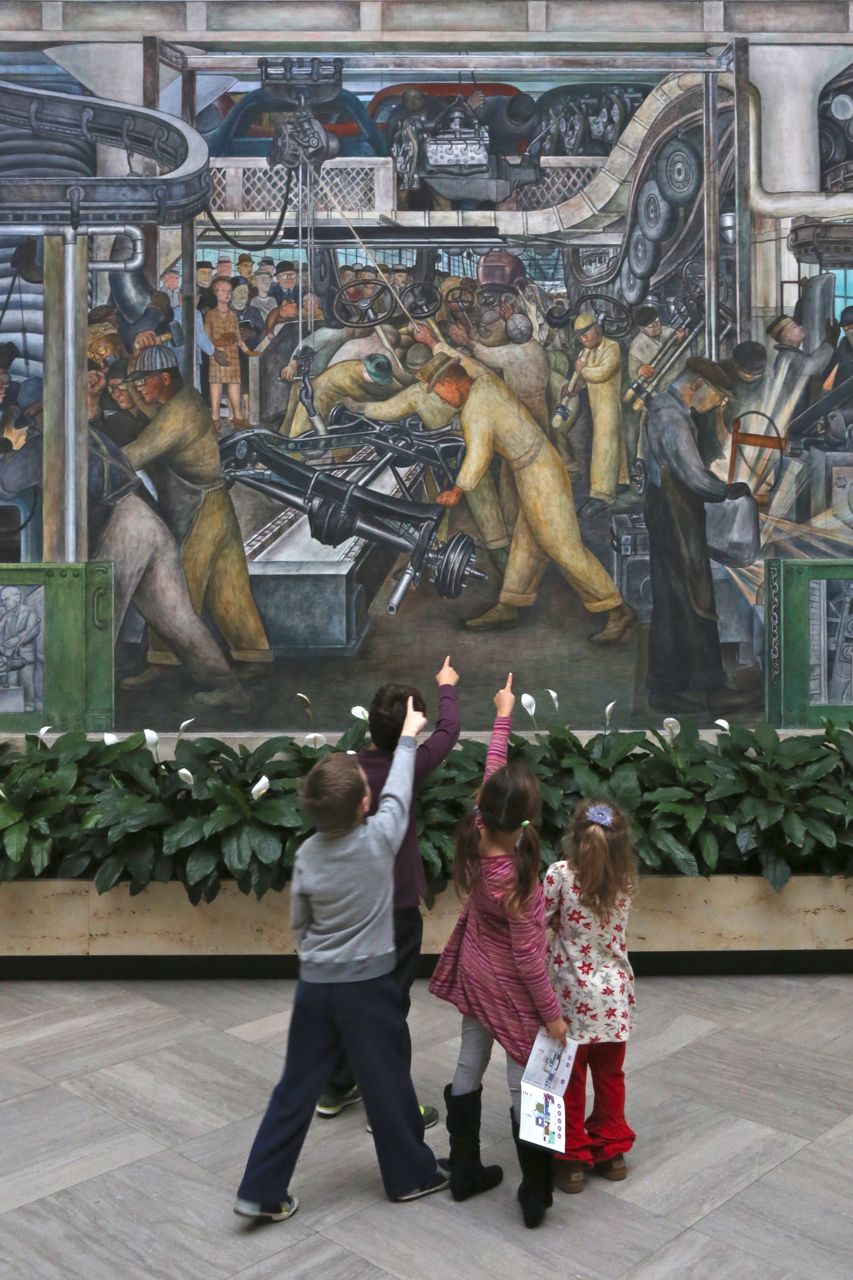 When Dave and I talked about coming to Michigan for Christmas, I told him I really wanted to make time to see the Detroit Institute of the Arts. When the city was going through its bankruptcy proceedings and there was talk a few years ago of having to sell some of the art collection, I lamented never visiting.*

Since we got here, though, things have been so crazy busy that I'd resigned myself to skipping the museum. We had a spare day yesterday, but with his sister and her family here, it seemed unlikely we'd be able to run off to Detroit. But then she asked yesterday morning what our plans for the day were, and I said we really didn't have any, but I'd hoped to get to the museum at some point. To my surprise, she jumped at the chance to go, so we all piled into the car and off we went. 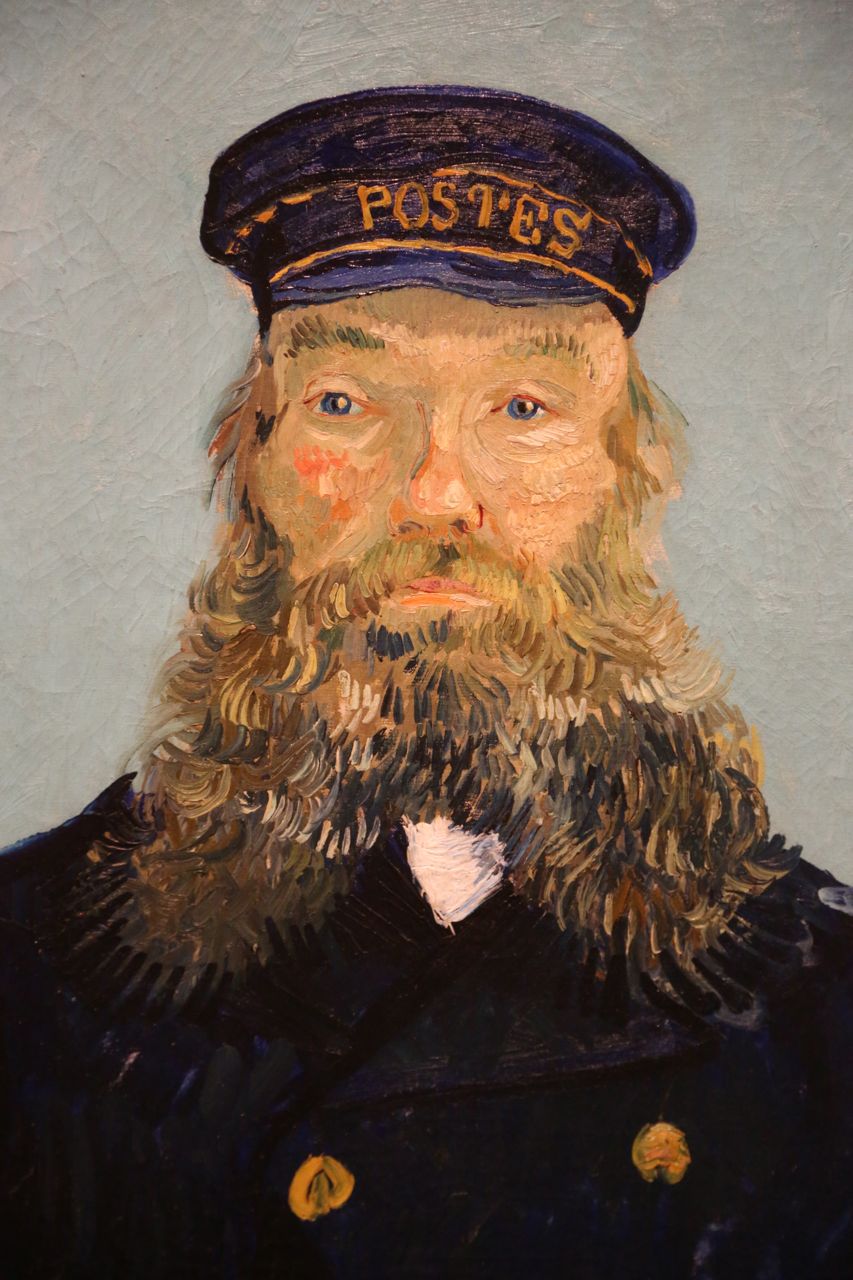 There's a lot of tremendous art there, probably collected by the auto magnates during Detroit's heyday as Motor City. The central atrium filled with Diego Rivera's murals of the working man is terrific. (Top -- and by the way, I didn't pose that photo. Those random kids were pointing on their own.) The galleries were filled with work by Cezanne, Van Gogh (above), Picasso, Warhol, Lichtenstein, Judd, O'Keeffe, Rembrandt, you name it. 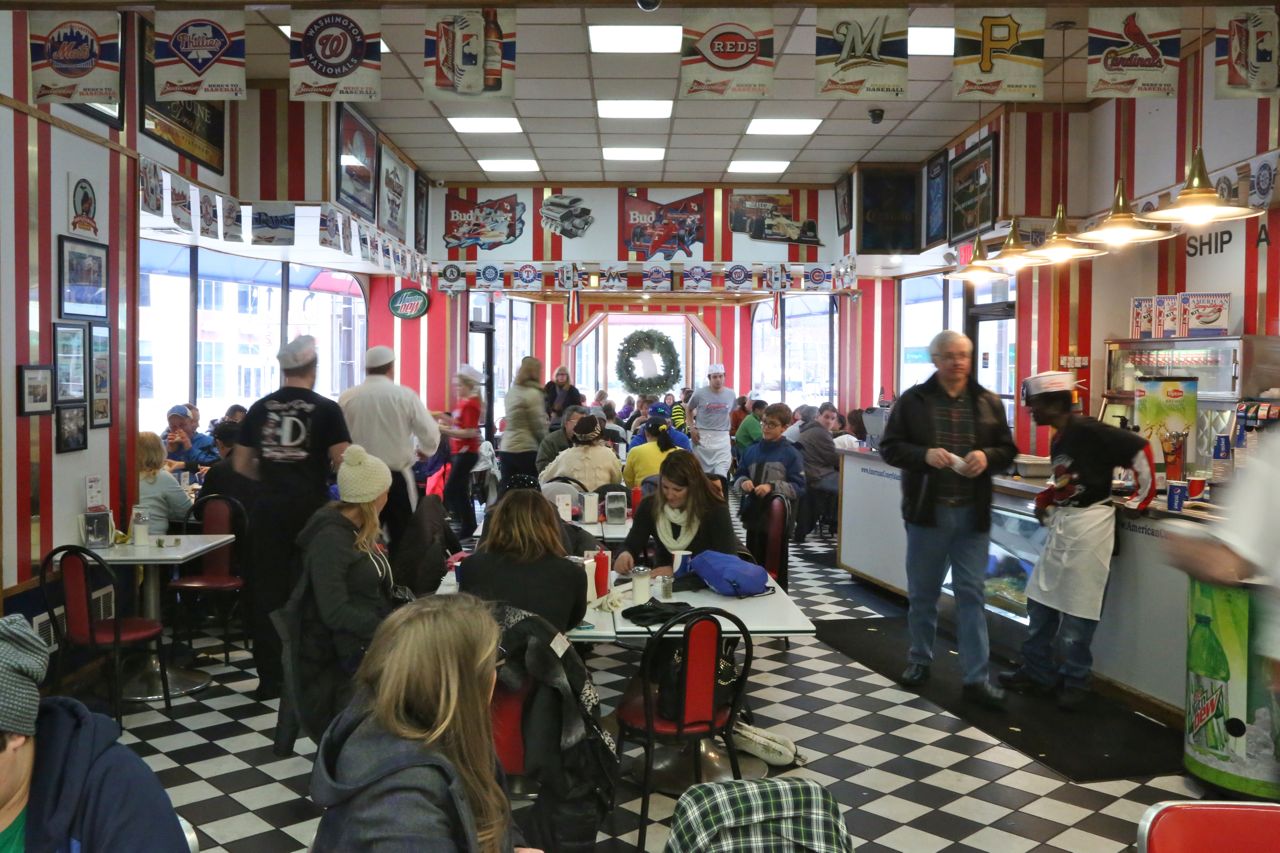 After wandering for a couple of hours and seeing pretty much all the highlights, we drove into downtown Detroit and went to the American Coney Island hot dog restaurant on a wedge-shaped corner amid the high-rises. I had a bowl of chili with cheese on top. (Yes, I know, our refrigerator is packed with leftovers and we're eating out. It's insane.) 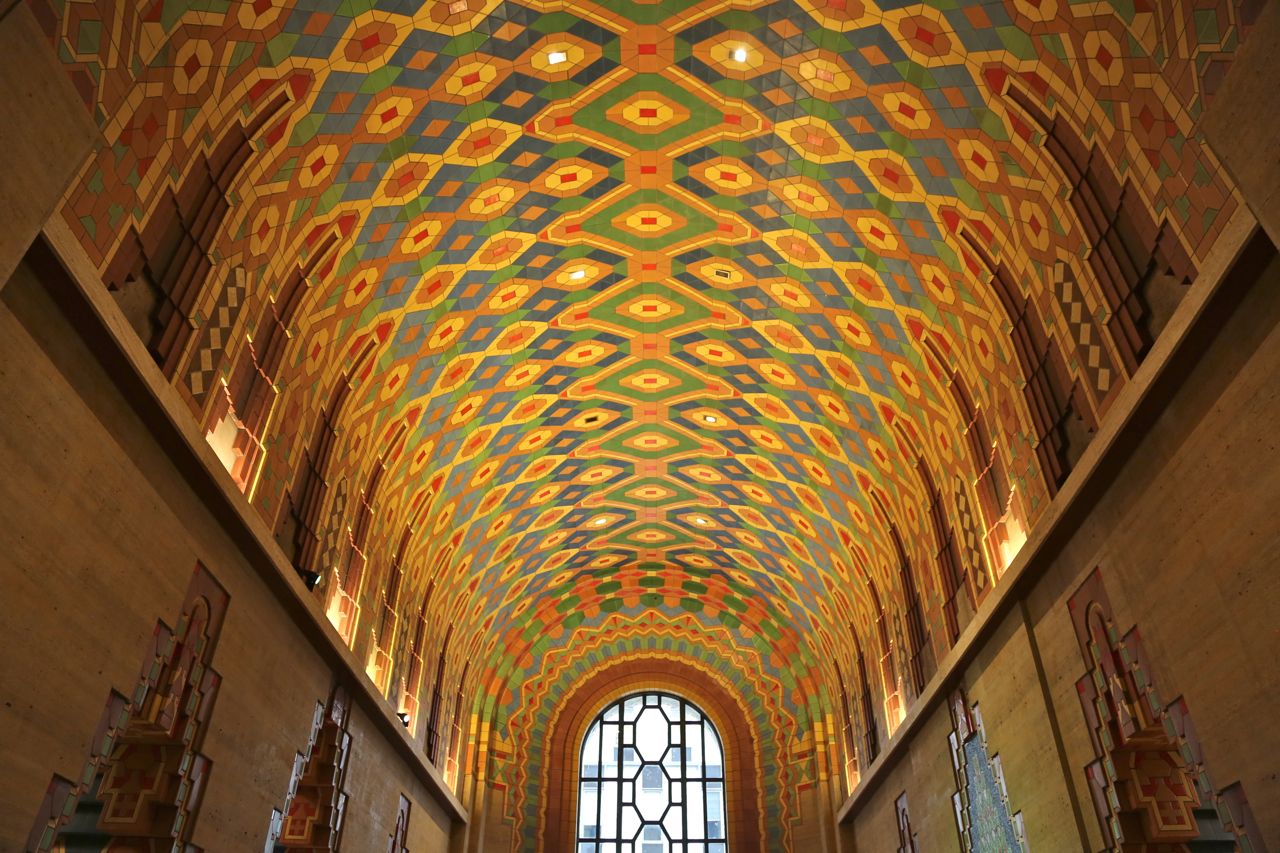 We went walking and stumbled into the Guardian Building, from 1929, which I read about when we first got here in a magazine that Dave's dad picked up at the airport. The tiled lobby ceiling is crazy beautiful. 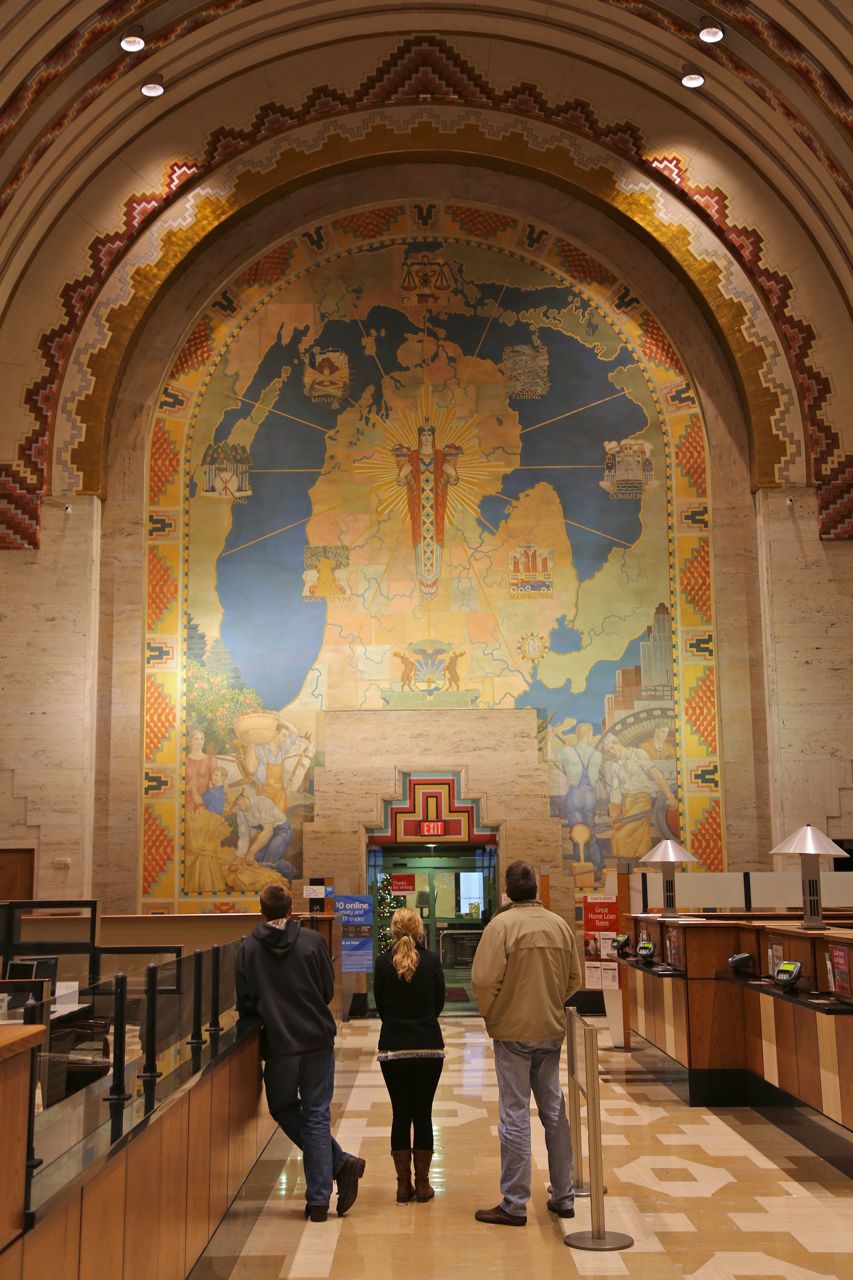 Dave and his niece and nephew were fascinated by the large Michigan map on the back wall. I bought a Detroit t-shirt in the gift shop, doing my part to help the local economy. 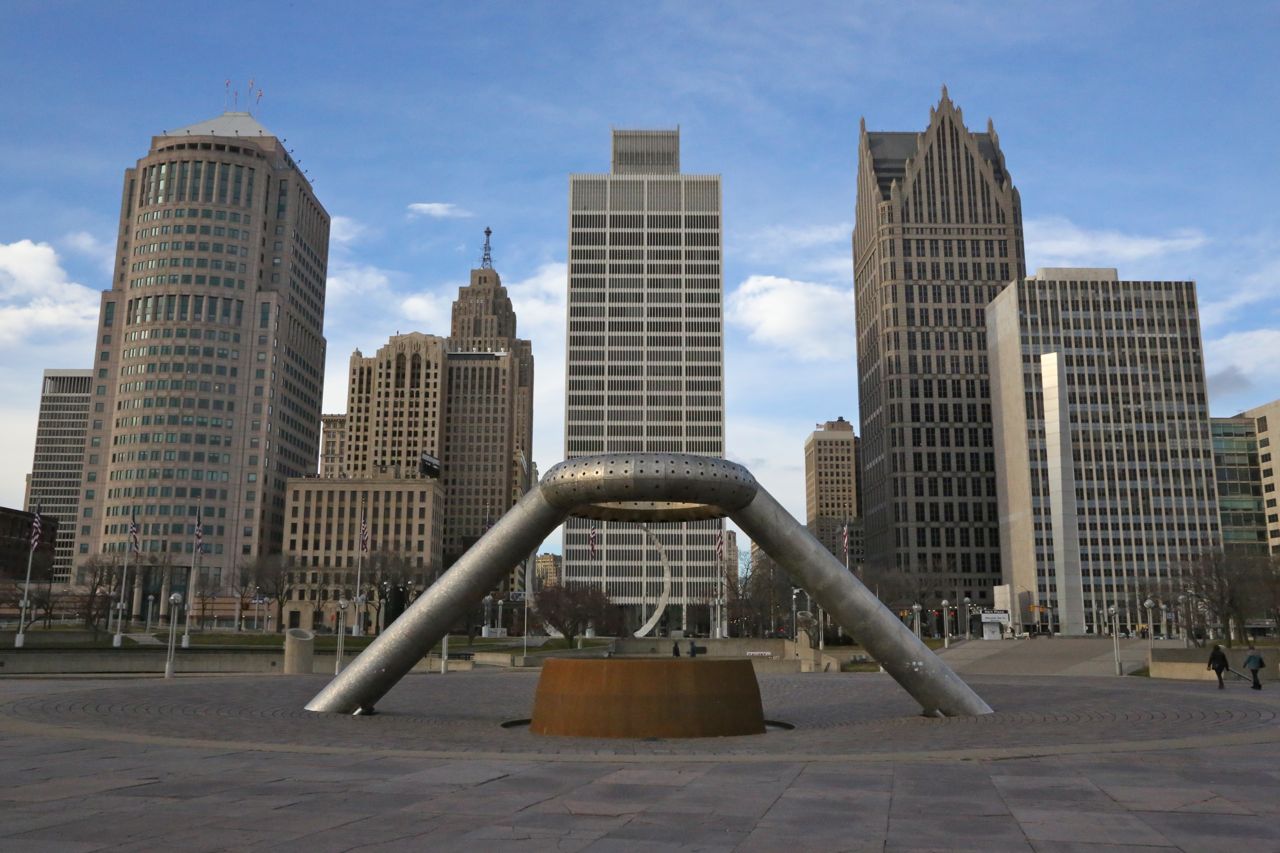 We walked a few more blocks to Hart Plaza, on the river, where the wind was blustery and we stayed just long enough to get some photos of the skyline. That's a fountain, in the center -- in the summer apparently it functions sort of like a huge shower.

Then we headed back to the 'burbs! I'm so glad I got some city time!
----------
*Eventually, after a massive fundraising drive to placate creditors, ownership of the art collection was transferred to a non-profit entity outside municipal reach, protecting the art from sale.
Posted by Steve Reed at 11:04 AM