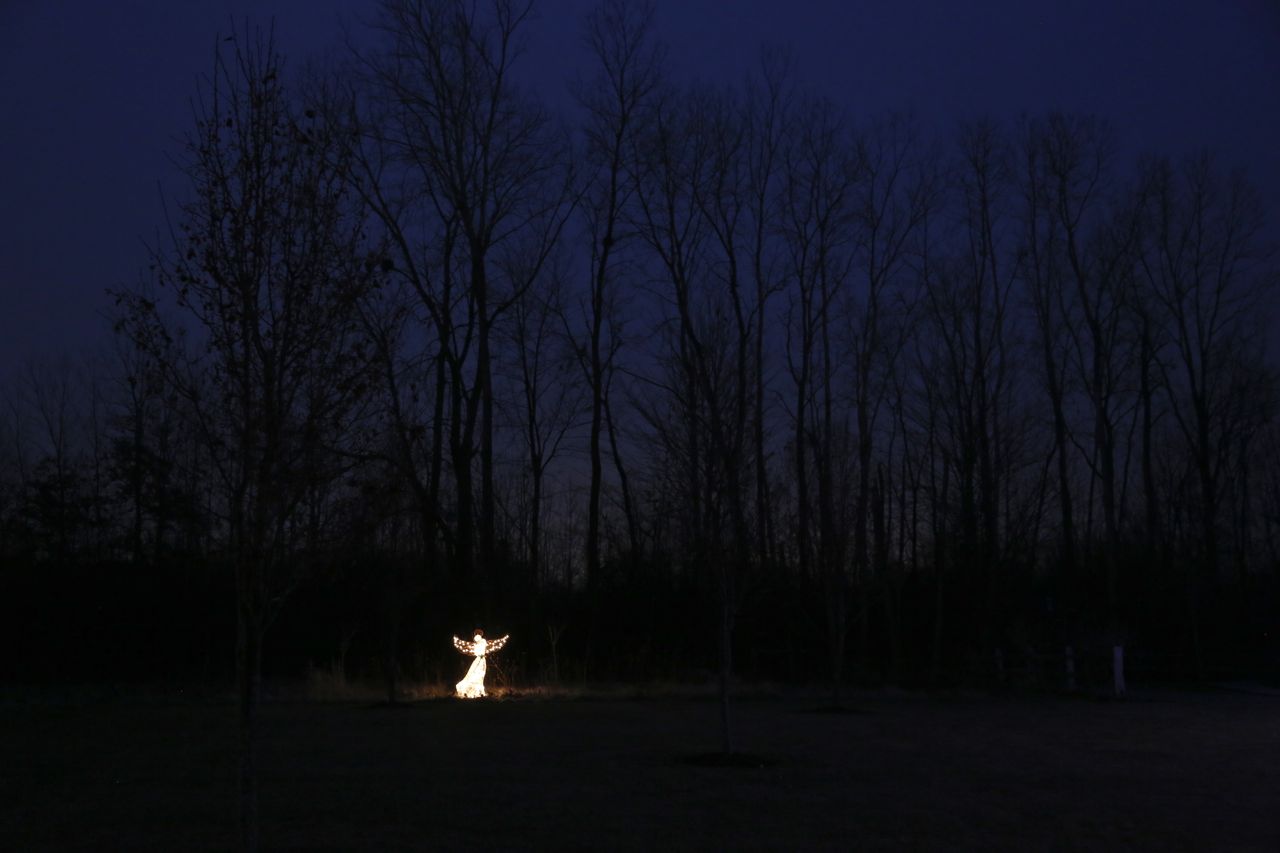 Our hopes for a white Christmas have been dashed -- it's just rainy and windy out there. But that's OK. If snow falls I have to drive in it, and I'd just as soon not try, Florida boy that I am.

We went to church last night with Dave's parents, to the Lutheran church where Dave spent his childhood. It was cool to see this mythical place that figures so prominently -- albeit sometimes negatively -- in his psyche. He knew some of the people and saw a few guys he went to school with, all grown up and middle-aged. Time marches on.

I was struck by how similar the church service was to the Presbyterian services I'm familiar with. Same candle-lit singing of "Silent Night," same gospel story of Jesus' birth. Of course I don't believe any of it, not literally, but I'm happy to participate. For me it's more about coming together with other people in a shared observance, a shared experience -- singing carols together, marking the calendar and reciting the mythology of our culture.

Then we went to a dinner buffet at the home of some family friends. They were happy to have me there though I'm sure I was a curiosity and possibly the subject of discussion and speculation. Or maybe I'm flattering myself. I was introduced simply as "Steve," with no elaboration, though I did mention to the room that Dave and I met while we lived in New York, and they know we both now live in London, so I'm sure it's apparent to them what's going on. We ate ham and baked beans and I had a long talk with Cousin Carl -- who was about 90 -- about genealogy. I just kept drinking wine, nodding and smiling and contributing a few words now and then.

Dave and I looked into shipping our stuff home via UPS, but I'm finding the same roadblocks I found with the coffee table. Insane prices. In fact the woman at the UPS store basically discouraged us from even considering it. (I suspect because it was Christmas Eve she just didn't want to deal.) We're going to try the post office, which as I understand it is more reasonable.

I hope everyone has a happy holiday!

(Photo: An angel aglow in a vacant lot down the street from Dave's parents' house.)
Posted by Steve Reed at 10:18 AM

I imagine there was quite a bit of speculation going on. I also am not a believer but unlike you I prefer not to participate. Well, if I was a guest at someone's house then I would be a good guest. I used to love singing Christmas carols when I was a child. I can remember going caroling around our neighborhood.

That sounds like a typical midwestern Christmas Eve. Where I grew up in Illinois, we used to have sloppy Joe's (every year) at my grandmother's house, then open presents there and then sometimes go to midnight mass. Then we would have a big Christmas dinner and more presents at home on Christmas Day. Good luck with the shipping project. I think you are correct about the post office, it should be less expensive. Have a great day!

Sounds pretty Christmasy and festive to me! There is beauty in ritual, whether in church or the dining room.
I love that angel in the woods. She is perfect.
Merry Christmas to you and Dave. Peace and love, too.

Merry Christmas to you and Dave! That is an awesome photograph!

what an odd little angel out there all by herself...Glad you humored the inlaws by going to church and behaving yourself. You are too good! Sorry to hear about the cost of sending stuff, also sorry to see Olga looking less than glad in her dog hotel. Poor little pooch...Have a great trip back to soggy ol London. We have similar weather here and it is tedious! Buckets of rain and darkness. Thinking to go back to Palm Springs soon! Meet us there, you would love it!

What an incredible photo that is, Steve! Merry Christmas to both you and Dave. I hope the rest of your trip is restful and great fun.

I hope you both have a terrific new year...

Don't tell my church, but I'm kind of with you on the mythology. But I still enjoy the ceremony and community, so there I am :)