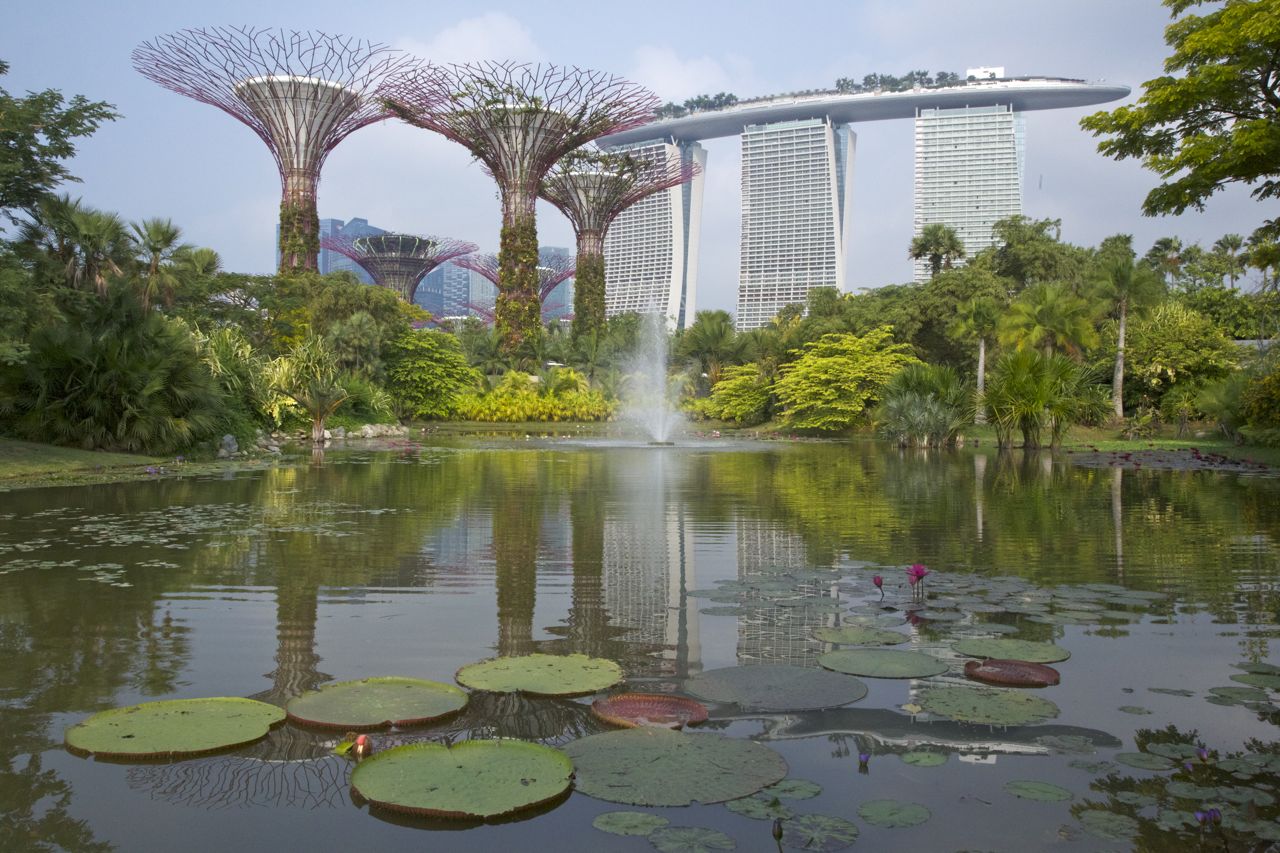 This morning I went to Gardens by the Bay, a huge public garden near Singapore's downtown business district. It's what you might call a futuristic natural landscape,  with vast steel "supertrees" rising far above the actual tree canopy, and backed by the bizarre, nautical architecture of the gigantic Marina Bay Sands hotel and casino. 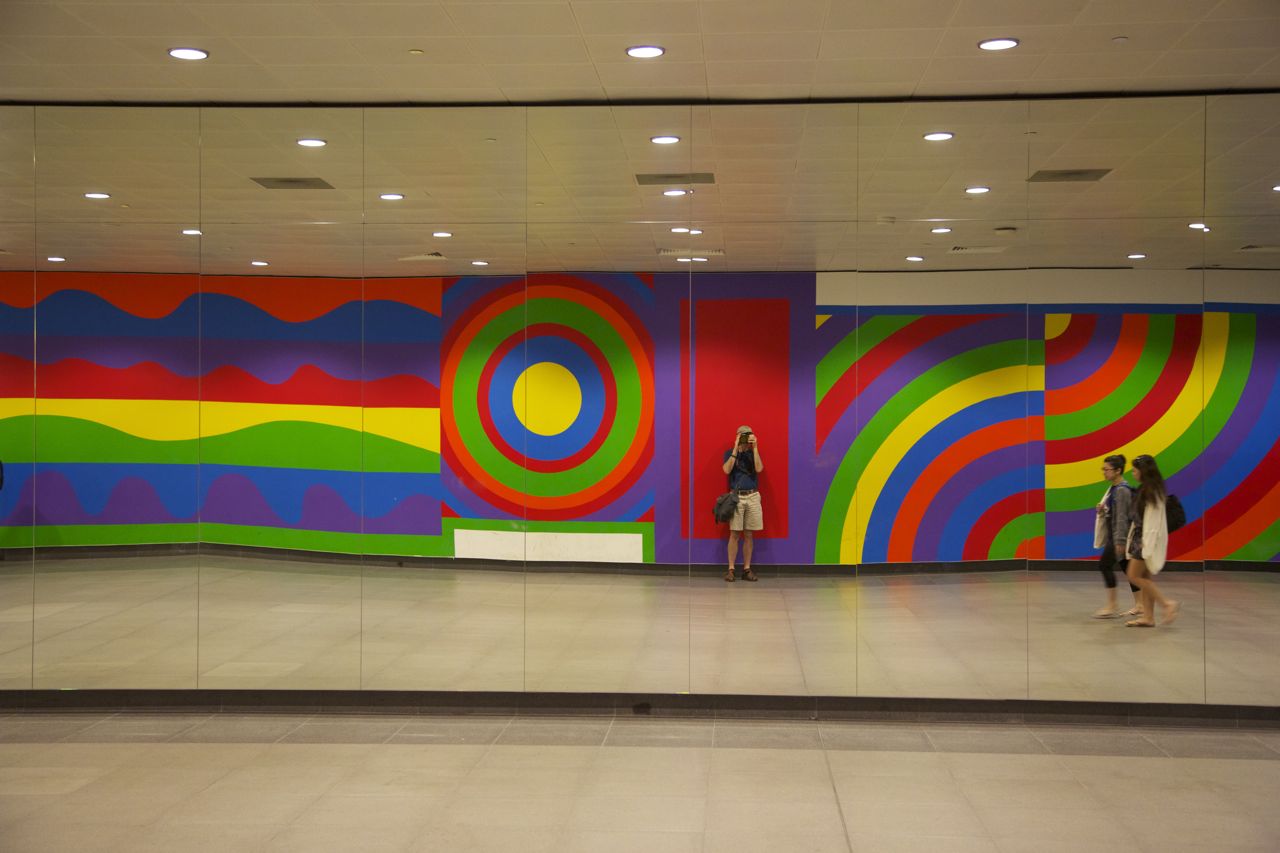 I took the subway to get there! My first adventure with public transport in Singapore! It was very easy (unlike China, the signs are in English) and very cheap. Interesting colorful murals in the station, too!

When I first got to the gardens -- where admission is free -- I walked the public paths and noticed some colorful birds. Eventually I found myself in the same area with several photographers toting massive lenses and pointing up at trees. A good sign that more impressive birds are about! 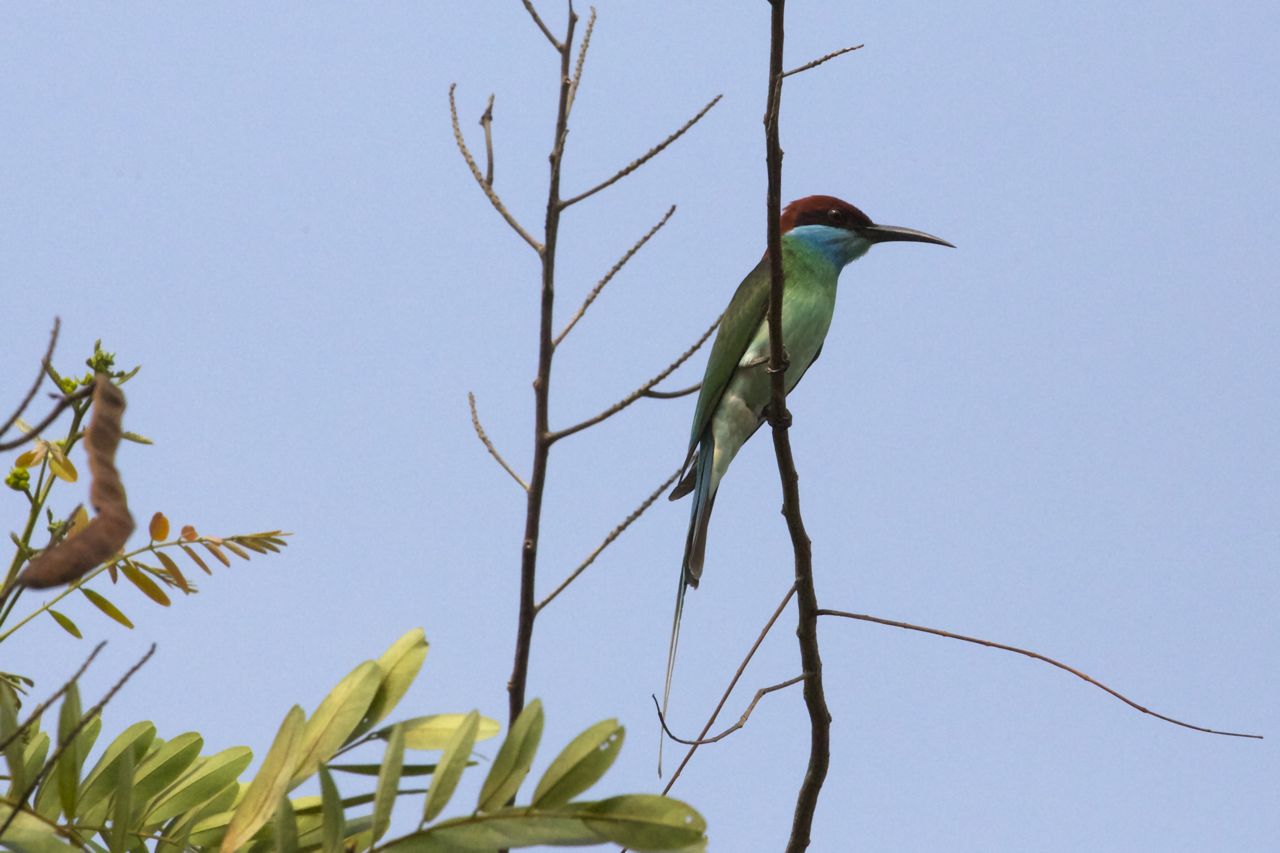 This spectacular bird is a blue-throated bee eater, or so I was told by another photographer who waylaid me and asked what I had seen. He was a pushy Australian (and I don't mean that as any kind of generalization about Australians -- just this particular Australian) who wound up giving me a long lecture not only about birds but also my camera settings and what I was doing wrong. I suppose he was trying to be helpful and, to his credit, he did show me some things about my own camera that I didn't know. But I was still annoyed, especially when he handed it back with all the settings changed, and it took me a while to put it right again. 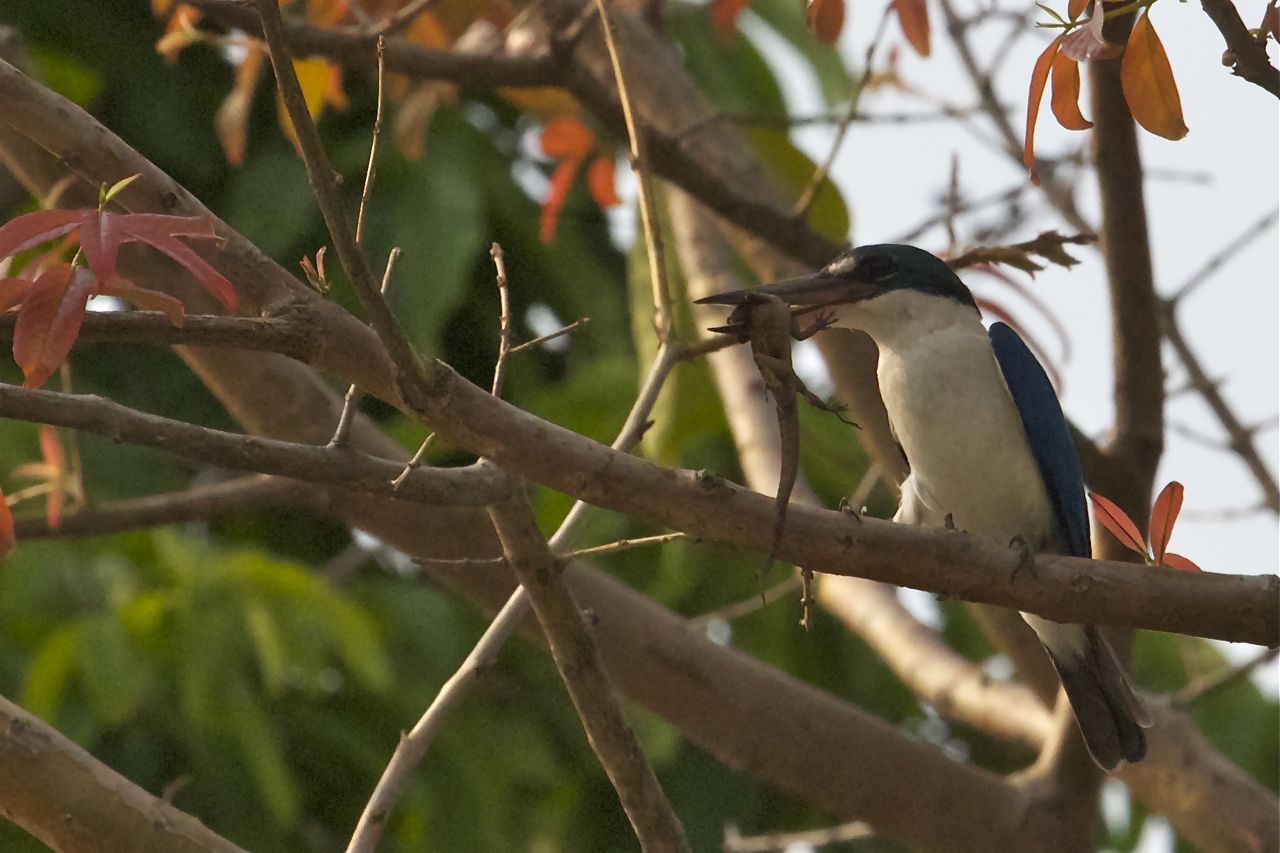 This is not a great photo, but that's a collared kingfisher holding his breakfast, an unlucky lizard. That bird was brilliant blue, but I just couldn't get a shot that did his feathers justice.

Anyway, after wandering the gardens and enduring the heat, I paid to go into two vast greenhouse domes, one dedicated mainly to flowers and plants from cooler climates, and another containing a "cloud forest" and "the world's tallest indoor waterfall." Surprisingly the domes were air-conditioned, which seems like it wouldn't do the plants any favors, but it sure felt great to me! 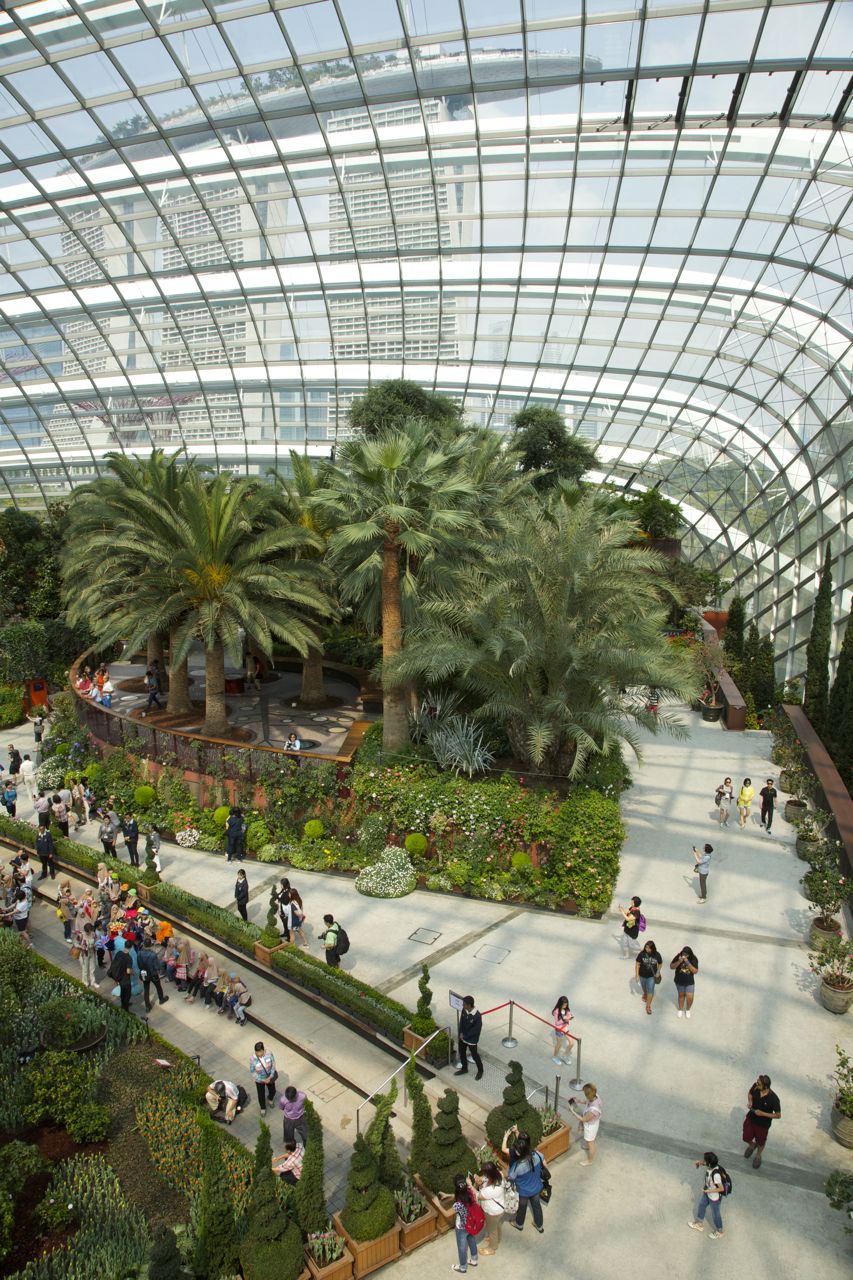 The cynical side of me wondered if this is our future. After we turn our planet into an essentially human monoculture -- us and the species that immediately serve our needs -- will we hold our remaining wildlife inside glass domes?

Really, though -- cynicism aside -- they were interesting and contained lots of surprises. (African baobabs!)

I also paid to walk an aerial walkway through the "supertrees" and had lunch at a Chinese restaurant below. It was not a picturesque lunch. 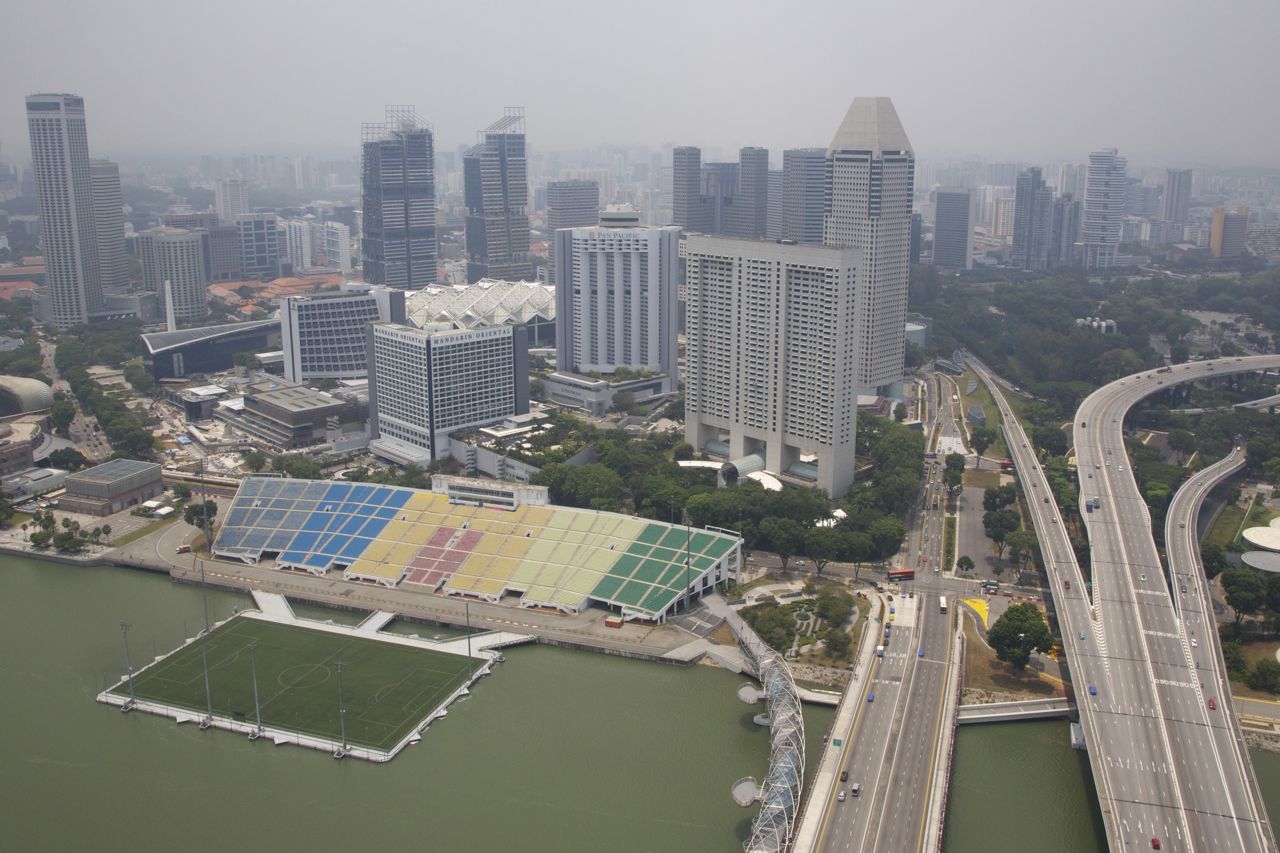 Finally, I walked over to the Marina Bay Sands hotel and went up 56 floors to the observation deck, which offers an amazing view over downtown Singapore. The weather has been a bit hazy with all the heat and humidity, but it was still an interesting perspective. (A tip, though, in case you come here -- if you go to one of the restaurants on the roof, you don't need to pay for the observation deck. I wish I'd known!) 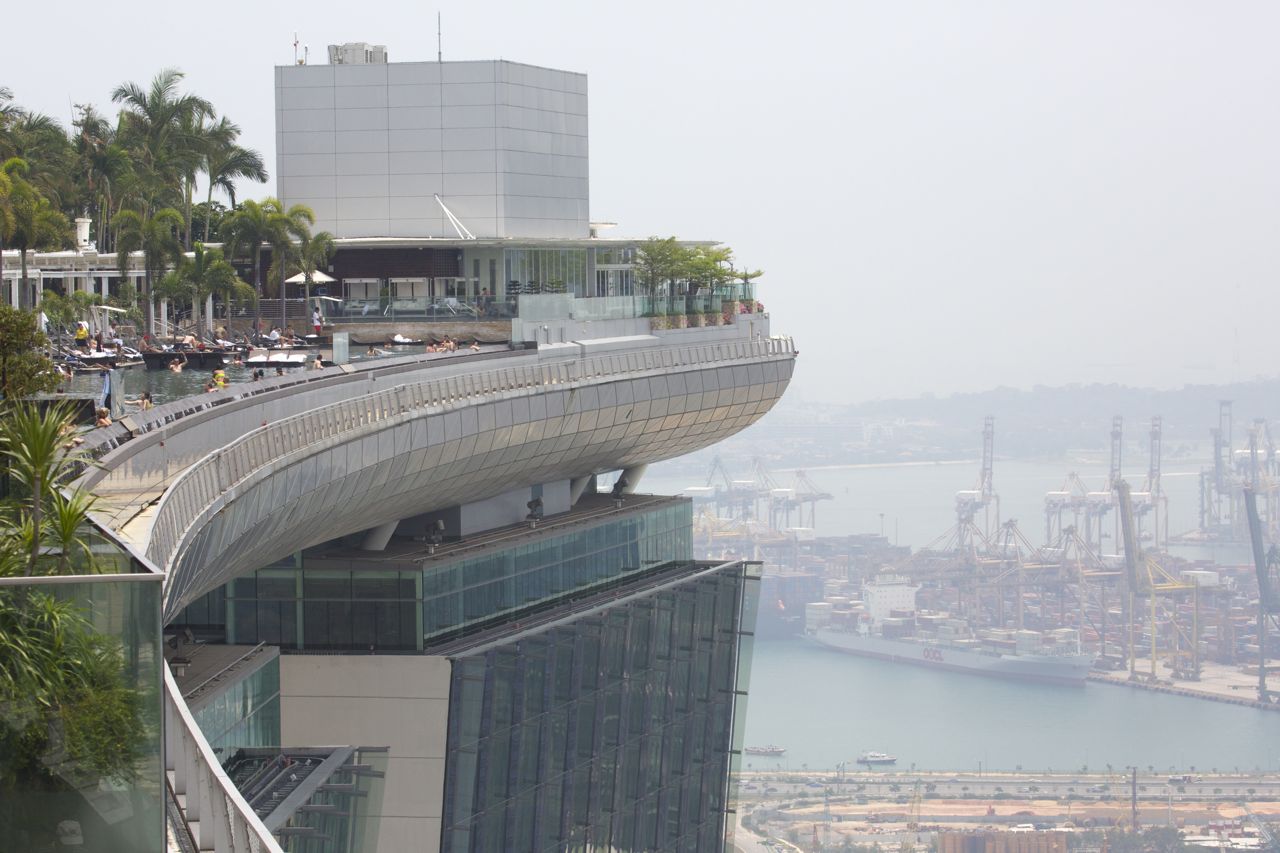 There's even a swimming pool up there -- but alas, not accessible to we peons on the observation deck.

Now I'm back at our own hotel, cooling off and preparing to go to the student honor band and orchestra concert that brought us all here in the first place. Tomorrow morning we fly back to London!
Posted by Steve Reed at 8:46 AM