A Bouquet and an Unsuitable Dog Toy 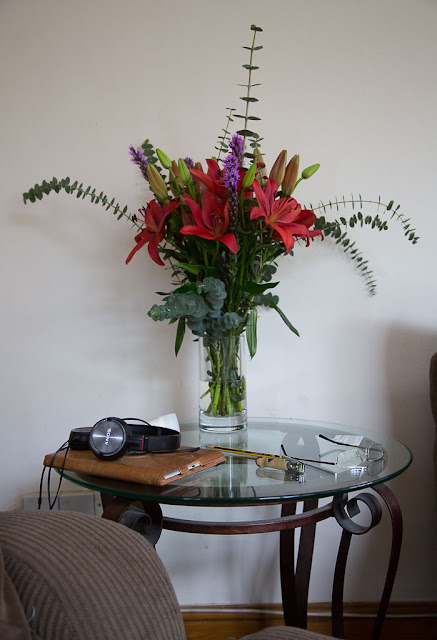 Just off Baker Street, near the fictional home of Sherlock Holmes and the building where my French class meets, a flower vendor sets up shop from a sidewalk cart every Saturday. A few weeks ago I popped into Pret after my class and grabbed a soup and sandwich, and as I sat in the window eating, I watched him making up bouquets for customers. I noticed he had some amazing lilies and blazing stars. They seemed to go well together.

(I was probably subconsciously reminded of the bouquets my mom gathered a couple of times in Florida when I was a kid, made of blazing stars and pine lilies.)

Anyway, I couldn't buy his flowers that day. But last weekend he had the same selection, so I stopped and bought some. He insisted on wrapping them up with eucalyptus, for the aroma. And now they're living on our end table and looking pretty amazing, I must say. 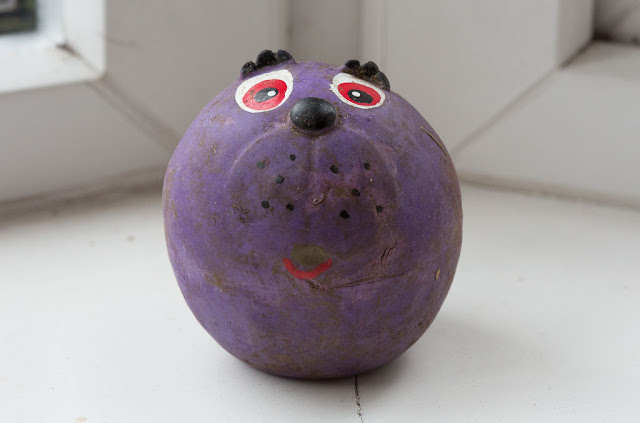 Also last weekend, Olga and I found this hollow rubber dog toy in the wilds of the West Heath. It is entirely too small and delicate for Olga, who would gnaw it to shreds within minutes (or possibly swallow it whole). I brought it home to photograph it, because I thought it was cute, but I plan to return it to the Heath in the hopes another more appropriate dog comes across it.

Dave and I are temporarily running low on TV shows to watch. We finished "Transparent," and watched a couple of episodes of the bizarre but interesting "Mr. Robot" (which, so far at least, has nothing to do with actual robots). We could buy the final season of "The Good Wife," but we'd have to pay extra for it, and it's sort of jumped the shark anyway. There's a true-crime show on British TV called "Wives with Knives," which is a terrifically campy title, but I don't really want to watch that.

Or we could turn off the TV, like we did last night, which probably wouldn't be a bad thing. Not so many years ago I didn't even own a TV, so for me it wouldn't be a major challenge. I got in bed at 8:30 and read for an hour, which was wonderful.

Oh, and I solved our candle drippage problem -- a glass pie plate! Hello!
Posted by Steve Reed at 6:16 AM